Oh the ironies. The Canadian Federal Court ruling on the Trans Mountain pipeline Thursday last week is brimming with them. The current federal government won the election of 2015 in part because of its resounding promise of a major departure from its predecessor’s alleged insensitivity to both the natural environment and relations with Canada’s indigenous population. The Federal Court ruling illustrates that the current feds are nowhere close to living up to that promise.

And it’s easy to see why. On the environment, the feds have tried to play both sides of a one-way street. They rode to power promising to kill an oil pipeline (Northern Gateway) that was unpopular among certain indigenous constituencies and all environmentalists. After winning power, they made good on that promise. So they’re anti-oil, right? They’re in favour of keeping the stuff in the ground, because of climate change? Unlike the last crowd?

Actually, no. Immediately following the Northern Gateway move, the new feds collided head-on with a much bigger and electorally far more significant reality, the mountain-sized one that heaves into view after the mists of vacuous green hyperbole have dissipated. Alberta has one single economy: oil. Suddenly it was clear that oil is not a bogeyman, it’s actually the source of a lot of the dollars the feds use to spend on things. The feds realized a very fast U-turn was in order. They took it, by vehemently supporting another pipeline, the Trans Mountain Expansion (TMX). They liked TMX so much that, like Victor Kiam, they bought the company. Ostensibly this was to make sure that pipeline gets built, but the real reason appears to be because they want to be seen to not be against every pipeline in existence.

The feds now try to make clear they really want to make sure TMX brings oil to the Pacific coast where it will be loaded onto oil-powered ships and carried to foreign ports, refined, and burned in foreign cars—whose drivers will pay not a cent for the carbonaceous exhaust they dump into the global atmosphere. This is the scenario the feds are gunning to make happen (see my previous article). For the feds, this is what has to happen for Alberta voters to be made whole.

How does this square with the promise to not be like the former Conservative federal government on the environment? Obviously, it does not square at all. What it looks like is that the current feds promised something in order to get elected, and then, once elected, did the opposite, so they could get elected again. Pretty much same old, same old.

As for the indigenous lobby, the Federal Court ruled that the current government did not properly consult indigenous constituents as it rushed to get Trans Mountain built.

And now with these ironies jauntily ricocheting through every print and broadcast commentary on the court ruling, the Alberta NDP government says it will abandon the electoral albatross that is the carbon tax. Alberta was until now the feds’ only ally on pipelines, carbon, and pipeline carbon.

Not a good week for the feds. It followed hard upon the bad previous two months that started when the Ontario Liberals were annihilated on June 7.

You may think you scent Schadenfreude wafting up from these words. I assure you, it’s not. My view on the feds’ predicament is, there but for the grace of God go I. The feds are on the horns of a dilemma that no amount of platitudes or liberal-progressive green mumbo jumbo can help them circumvent. It’s either cut carbon, or grow Alberta oil. Because, Alberta’s economy is as oil-soaked as Venezuela’s. It may be dawning on the feds that Alberta oil is as diabolically excremental to Alberta’s—and Canada’s—economy and society as Venezuela oil is to Venezuela’s economy and the economies of the Brazilian and Colombian towns that border Venezuela. Canada simply cannot make meaningful cuts in CO2 while growing the Alberta oil industry. And Canada cannot “diversify” general export markets—i.e., get out from under Trump’s thumb—by diversifying oil markets. All that does is to shift risk to the vagaries of other export markets—the devil we don’t know. 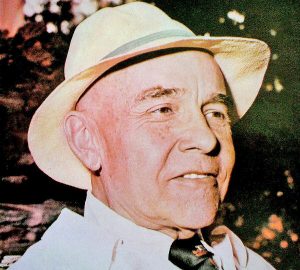 Juan Pablo Perez Alfonzo, Venezuelan and founder of OPEC. His most famous quote: “I call petroleum the devil’s excrement.”

Our excremental oil problem has nothing whatsoever to do with Trump. It has everything to do with the new technology in the US oil patch. The Americans are back to being a major exporter of oil. Importing Canadian oil is not a matter of life or death. As we saw with Trump’s beloved predecessor on the Keystone XL decision (remember that?), all it takes is an ill wind of public opinion to wreck a multi-billion-dollar plan.

The answer to our Trump problem is to just figure out how to deal with Trump: he’s a likely temporary feature of our only export market. And the answer to the oil market problem is to step back, realize oil is energy, and that there is another form of energy that is not just physically superior in every dimension to oil but that is plentiful in Canada.

I’m talking about uranium, of course. Just consider its advantages over oil: far more energy, far less mining, absolutely minuscule waste, none of which is gaseous. Next to oil, uranium is God’s gift. Could we make money off uranium instead of oil? You want a way to circumvent US market power, good grief. Look no further than Canada’s most brilliant invention, the mighty CANDU. Canada needs to stop encouraging its young minds to waste time inside the silly green box trying to make fairy tales come true, like getting the sun to stay up 24 hours a day or the wind to always blow in the same direction. We urgently need answers to urgent questions, like: what happens when our population increases? What happens when electric cars achieve 10—or 15, or 20—percent penetration into the car market? (Hint: the environmental ramifications in Canada depend hugely on which province you’re in. The technological ramifications spell drastic expansion in the power—literal and political—of municipal public utilities.)

The Alberta NDP escape from the federal carbon tax plan has to do with their monumental frustration with yet another irony connected with the court ruling. Their chief electoral rival, the United Conservative Party, comprised of the remnants of the carbon-taxing PCs the NDP defeated in 2015, are today, in 2018—successfully, it appears—painting the NDP, the carbon-tax heirs, as the carbon-tax progenitors. And that is hurting the dippers. That may be because they have proven utterly reality-blind and tone-deaf on the other liberal-progressive dimension of climate change “action”—renewable energy. And that Alberta voters have figured out that this brand of green amounts to expensive and largely ineffective posturing.

I mean, you only have to visit the Alberta Electricity System Operator data page to see renewable energy (often missing) in action. Here’s Alberta wind and electrical demand, on September 4, the first day of fall school. Note the y-scale difference between the upper and lower charts, and the two-orders-of-magnitude difference in megawatts during the peak demand part of the day.

← Climate politics and carbon proprioception in Alberta: after the peace, a phony war?
The unintended consequences of green energy: or, why Oakville is in Napanee →
0 0 votes
Article Rating
Subscribe
Login
1 Comment
Oldest
Newest Most Voted
Inline Feedbacks
View all comments
Engineer-Poet

It would be interesting to see the cold-snap and summer demand peaks rather than the curve for what’s probably a fairly mild day in September, just to gauge the scale of the problem.

Since Canada has certainly not forgotten how to refurbish CANDUs, it’s vanishingly unlikely that it’s forgotten how to build them.  But I wonder if that’s the best way to move at the moment.  It might make sense to go the way of China and its heating reactor, only do it one better:  reach south of the border for NuScale nuclear steam generators at ~200 MW apiece, and press them into CHP service in cities like Calgary.  If you can design a reactor building which reduces the size of the emergency planning zone to the outer walls, you can place them inside cities where you can exploit the low-temperature heat effectively.

Given the 1.2 million population of the city, doing this as a comprehensive makeover would probably give the NuScale production plant some pretty good economies of scale.  1.2 million people is maybe 480,000 households; at 1 kW/household there would be enough electric demand to occupy 8 NuScale units.  8 units @ 130 MW(th) waste heat at full power yields 1.04 GW(th) of heat or about 3.5 billion BTU/hr.  If your typical household uses 20,000 BTU/hr in winter, that’s enough for almost half your heating demand in winter and probably all heat and DHW for most of the year.

0
Reply
Item A1 Current concentration of CO2 in the global atmosphere:
421.10 parts per million
In the last hour:
This content is updated at 50 minutes past the hour. Refresh at that time to see latest available data. Sources: www.ieso.ca and EmissionTrak™