The grim, horrific, and epic battle of Stalingrad marked the turning point on the Eastern Front of the Second World War. Hitler’s 6th army threw all its men and resources into capturing the city, and was bludgeouned into surrendering. From then, Nazi Germany lost all the remaining major battles and was annihilated. It is still debated today whether Hitler’s destruction was inevitable given the size of the Soviet Union, the extent of its manpower, and the size of the military support it received from the United States. But nobody denies that Stalingrad was the battle that turned the tide against Hitler. 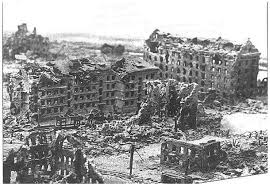 For the Nazis in World War II, this—the Soviet city of Stalingrad—was what defeat looked like. The Indian Point power plant is the Stalingrad of the climate change war: if it falls, New York will dump more carbon into the air.

Mankind faces a similar epic battle on the climate change front. The Indian Point nuclear power plant provides zero-carbon power to New York, one of the world’s most storied—and storeyed—cities. The plant’s existence is opposed by anti-nuclear activists, who have managed, with overt and massive support from the fossil fuel lobby, to pressure New York governor Andrew Cuomo to close it. Cuomo turned opposition to Indian Point into a political crusade of sorts. It has seemed, and still seems to some, that the plant is doomed.

But Cuomo has very recently taken a very interesting position on nuclear power. His administration has proposed a clean energy standard that includes support for three nuclear plants upstate nuclear power plants that are struggling to remain financially viable in weak power markets that have been tilted to prefer renewable sources like wind and solar backed up with natural gas. The fossil lobby is suing over this. They know which side of the bread the butter is on. If the nukes keep running, fossil doesn’t get that part of the hugely lucrative power generation business.

Cuomo is now in the puzzling position of opposing a nuclear plant close to New York City, but supporting three nuclear plants upstate. His support for the latter is for all the right reasons. The plants play a huge positive role in the upstate economic ecosystem. They generate huge amounts of electricity, which though it sells at very modest unit prices generates huge revenues for their owners. These revenues pay plant worker salaries, which generate massive income tax revenue for the state. Budget-conscious politicians like Cuomo love this revenue: it helps them keep the promises that get them elected.

But important as jobs and tax revenue are, perhaps the most important right reason for Cuomo’s support for the three upsate nuclear plants is the sheer amount of carbon dioxide (CO2) they avoid as they crank out electricity 24 hours a day, seven days a week. The New York PSC chief who is in charge of implementing the clean energy standard estimates they avoid the dumping of 15 million tons of CO2 every year into the global atmosphere.

Now, Indian Point is a three-unit plant with a total generating capacity of about 2,000 megawatts. A gas-fired plant of equivalent capacity would dump roughly 8.3 million tons of CO2 into our air.

Which for the governor represents a very stark choice. It’s Indian Point, much hated by activists who rationalize their hatred by trotting out silly science fiction and urban legends, or a gas plant that dumps 8.3 million tons of CO2 into our air. That CO2 will help to add power to super storms like Sandy, which devastated parts of New York City in 2011, and Matthew, which just a few weeks ago killed a thousand people in Haiti and along the U.S. east coast, and caused untold billions of dollars worth of damage.

In short, the governor needs to decide, once and for all, whether climate change really is a battle worth winning.

And if he decides that it is, then he has to save Indian Point.

Indian Point is Stalingrad in this war. It cannot go down.

Figure 1 shows a single recent day’s CO2 emissions from the current New York grid-connected generators, compared with what they would have been on the same day if the nuclear plants were shut down and their output was replaced with gas-fired generators.

Http iframes are not shown in https pages in many major browsers. Please read this post for details.

I beg to point out that Indian Point has two functioning reactors. Unit 1, which incorporated an oil-fired superheater (and, in its original loading, a thorium core spiked with fully-enriched uranium), has been out of service some 40 years.

If I were in charge at Con Edison, I’d propose running a hot-water pipeline from Indian Point, to substantially reduce the amount of fossil fuel required for the Manhattan steam-heat grid (which, thanks to absorption chillers, handles a significant summer cooling load). That ought to provoke an interesting response! But given my druthers, I’d love to see the nuclear option for Ravenswood revisited — the giant oil-burner they actually wound up building has bounced from owner to owner since Con Edison was forced to sell it. Just applying for an “urban setting” license would be a Hell of a lot of fun.

I did say three units, didn’t I… well thanks for the correction. I did not know that about the thorium core.

If I were in charge at Con Edison, I’d put YOU in charge of that steam pipeline, it’s the best idea I’ve heard for decarbonizing NYC heating/cooling. Yes of course it would raise a stink among the usual suspects but there eventually comes a time when you just have to engage and defeat the opposition.

A PHW line some 67 km long has recently been built to carry heat from the Melnik lignite burner (which is only 500 MWe) into central Prague (only 1.3 millions population). It’s quite the impressive project!

To do the same at Indian Point would call for installation of backpressure turbines to replace the current condensing models, and a hit of something like 10% in electrical power output. I daresay it would be worth it, on economic grounds, because supplying fuel for the heating boilers, with the increases in load on pipeline capacity caused by, for instance, the Vermont Yankee shutdown, isn’t going to get any easier. And I know just the guy for the job, too. This friend of mine, a pipeline engineer (that’s as close as I can get to his speciality off the top of my head — any kind of tube you can put fluids through, whether oil, gas, drinking water, or peanut butter, & pretty much anything you might find at either end of such a tube) who’s currently languishing out in Alberta, would jump at it! He has a head for the grandiose, & I’m sure he’d have as good a time as when he changed the shape of a country (Ras Laffan / Al Khor City gas terminal project).

Publius, you and I might know the same guy.  Initials EBW?

Steve, I’ve suggested replacing the Manhattan fossil-fired steam plants with either packs of NuScales or S-PRISMs with salt storage (you’d get much better topping-cycle electric production with the S-PRISMs).  As both technologies are walk-away safe more or less indefinitely, they should be certifiable for installation in populated areas under any sensible regulatory regime (which the USA does not have).  That would allow them to be plumbed into existing steam distribution systems instead of having to build entirely new HW networks.