What would happen if the Internet suddenly were powered only with “renewable” energy? Let’s imagine what the impact would be in a place like Ontario.

First, customer contact centres at companies like Rogers (my Internet provider) would be swamped with calls from initially testy then angry then frantically-desperate-enraged customers demanding to know precisely how long they would have to wait, with their lives on hold, before rock-solid 24/7 internet service was restored. 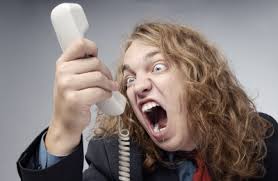 The face of a 100-percent-renewable-energy electric grid. Internet provider and electric utility call centres, and, soon after, elected politicians’ staff would suddenly spend most of their time speaking with people who sound like this person looks.

The Internet providers’ call centre staff would, rightly, hot-potato the issue and tell customers to call those who are more directly connected with the problem, i.e. those in the electric power industry. They would quickly become able to recite at will the telephone numbers of people in the customer contact centre at the electric utility that served the customer.

From there, the customer call experience would proceed along the following lines:

The above-described likely reaction to a less-than-100-percent-reliable Internet describes perfectly (if I may say so myself) how things would play out if the organization behind the Leap Manifesto got its way and Canadian provinces and territories moved to a 100 percent “renewable energy” electric grid.

Take e-commerce. Let’s say you’re a best-selling Canadian author who happens to be a Leap Manifesto co-signer and, moving with the times, you sell your books through iTunes, among other e-commerce vehicles. (I mean, iTunes is so convenient, and cheap—they’ve cut out all that nuisance human labour that is involved in bookstores and other dinosaur-economy relics.) Never mind that you specialize in anti-corporate screeds, that you make a big deal out of supporting the same labour that is cut out of iTunes, and that you fulminate in print against Big American Multinationals. Never mind that these Big American Multinationals ought to include Apple (the company through which you sell your books on iTunes) and Amazon (the company whose massive server farms host services like iCloud, another Apple product).

Forget about these irrelevant details and just think: what would be the impact on sales of your book through iTunes if Amazon’s gigantic server farms, currently located in the U.S. state of Virginia, which makes most of its electricity in coal and nuclear plants, suddenly switched to only renewables?

Think about that as you wait on hold, fingers impatiently drumming the desk, while some twenty-something in the premier’s office tries to find the number to somebody in Virginia who’d be better able to answer your question of why Amazon’s server farm is experiencing so many power blackouts and brownouts, affecting your e-sales.

I’m waiting for any company or firm — like the herds falling all over themselves with PR of how they’re wind and solar-powered — to proudly proclaim, like the skipper of the nuclear-powered Nautilus announced, proud to be running on nuclear power.

Kyle – A good calculation except for the last step. A square kilometer is 1,000 x 1,000 = 1,000,000 square meters, so the total area needed is 21,885 (and change) square kilometers. This is the calculation that makes solar enthusiasts gush and wave their hands and say “We can DO this!” The trouble is, there’s more to it than just the power and area calculation.

Oops, thanks for correcting. Been a while since grade school.

I think this is far form the “We can DO this!” of which you (or they) speak of. I just wanted a simple set of calculations to visualize what it would take. I got 318km² to replace Bruce nuclear (9.3km²) with solar panels, solar capacity factor being 14% in Ontario. Also with all the batteries would cost $69 billion USD with all the batteries (using Tesla Powerpacks). Also there’s the environmental impact of making 318km² of solar panels’ waste.

> Does this make any sense?

In addition to Andrew’s correction…

You start with energy but then convert to power, then later you multiply that by CF. The purpose of the CF is to do the opposite conversion (power x CF x hours = energy). So you are essentially double applying the CF. The correct calculation is:

For comparison, the US has 4436 square kilometers of surface parking lots, so if we covered them with solar awnings it would power the country.

Reading “Leaping into the future” in the title, I thought this would be Naomi Klein & co’s “Leap Manifesto”.
Opportunity missed ?

this IS about the Leap Manifesto! The Canadian author in my scenario is based on a real-life character…