At the beginning of August, only die-hards like me were paying much attention to the Toronto Blue Jays. The Jays were six games behind the American League East-leading Yankees, and their prospects of winning the AL East looked ready to slide into nowheresville. My Rogers Centre metric, renamed here the Rogers Centre Meter, appeared destined to become, like CIPK and WIPK, just another one of my obscure statistical offerings to environmental advocacy. Then August happened.

Today, Toronto heads into a critical four-game series against the Yankees one-and-a-half games up on the Bronx Bombers. Game One, scheduled for yesterday, was rained out and postponed until Saturday. That means it was to take place in New York—the Jays’ home park, Rogers Centre in downtown Toronto, is a covered stadium. With its roof closed, Rogers Centre has an indoor volume of 1.6 million cubic meters. And that means it can, with an ambient temperature of 25° C and one atmosphere pressure, hold 2,877 metric tons of carbon dioxide (CO2). 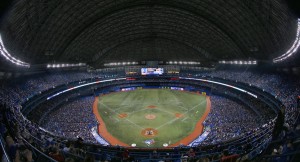 You are looking at not only the home park of the Toronto Blue Jays, currently the best team in baseball, but at enough indoor volume to hold 2,877 metric tons of carbon dioxide. Ontario natural gas-fired power plants, contributing less than ten percent of the province’s electrical energy in the first 18 hours of September 10 2015, dumped enough CO2 to fill this vast indoor space more than five times over.

[stextbox id=”info” caption=”How to calculate how much CO2 fits into Rogers Centre”]At 25 °C, Rogers Centre with its roof closed holds 2,877 metric tons of CO2. Here is how I got that number:

← Hiding from the rent man: what 400 parts per million tells us humans about ourselves
Book sales, iTunes, and a renewable energy-powered Internet: Leaping into the future, and over a cliff →
0 0 votes
Article Rating
Subscribe
Login
0 Comments
Inline Feedbacks
View all comments