The carbon dioxide (CO2) content of a kilowatt-hour of Ontario-generated grid electricity is today freakishly low. At two p.m. on Monday March 30, it was just over 23 grams (see Table A1). Compare that with the carbon content of other fuels, like gasoline or natural gas (shown in Table P1, below), and you see it is, well, freakishly low.

There are those who believe that energy conservation is the way to cut CO2 emissions. The table above gives a clue as to why that is a highly simplistic and off-base belief. As you can see, the most expensive kWh are electric; they are also by far the cleanest, i.e., have the lowest CIPK. The least-expensive kWh comes from the second-dirtiest fuel, natural gas. And the dirtiest kWh, from gasoline, is about half as expensive as the cheapest electric kWh.

When you roll up to a gas station to fill your car, you think you are buying gasoline, and strictly that’s correct. But what you are really buying is energy. Your car uses energy, most appropriately measured in kilowatt-hours, to run its engine.

Similarly, when you heat your home you are, again strictly speaking, using oil or gas or electricity or wood or some combination of these. But really, what you are after is energy, again appropriately measured in kilowatt-hours. (A kilowatt-hour is 3.6 million Joules.) Thinking this way allows you to compare the kilowatt-hours offered by different energy sources, on the basis of price and CO2 content. That is what I have done in the table above.

I made the point in a Canadian Energy Issues article some months ago that, in the area of electricity conservation—which is what most environmentalists mean by energy conservation—it is entirely possible that Ontario could implement the most successful conservation program in the world and still wind up dumping more carbon into the air. Let me explain.

Let’s say that Ontarians, through huge self discipline and sacrifice, reduced electricity consumption to such a degree that Ontario electricity generators only had to make say 145 billion kWh of electricity in a given year. Here is what such a year might look like: 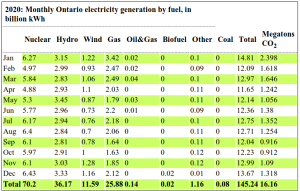 (For an idea of how much the provincial generation fleet actually produced in each year between 2010 and 2014, see this table.)

I made this counterfactual by dropping nuclear capacity from 11,100 megawatts (which was the average fleet power output during the month of January 2014) to roughly 8,400 MW—a reduction of 2,700 MW. People who call themselves environmentalists would approve of this. I also added wind and combined cycle gas at a ratio of 20:80, so as to achieve the overall 145 billion kWh.

And by 2020, the entire Pickering station complex, both plants, will be out of service. And there are no plans to replace its output with new nuclear.

And there is another thing to consider. Have a look again at Table P1 above. If all you’re after is kilowatt-hours and you can get them either from natural gas or electricity, which kWh provider are you going to choose?

The 2020 counterfactual illustrates how a successful conservation program is a fail for the very environment that the environmentalists claim they are trying to save: GHGs have gone up, and spectacularly so. It does not say anything at all about energy switching. Those 5 billion kWh “saved” in the conservation program could have simply been the result of very straightforward economic calculus (assuming the prices in Table P1 are the same in 2020). Who in their right mind would willingly pay 18.95 cents per kWh for electric heat when they can pay 3.82 cents for gas?

Only someone who has their eye glued on the Prime Environmental Number, which is the CIPK, and is willing to pay an additional 15 cents per kWh for cleaner energy.

The rest of us will go with price, and switch—from electric space heating to gas- or oil- or wood-fired space heating. In which case, add another million tons of CO2, at least, to the provincial annual inventory.