Many people mistakenly believe that because they see so many wind turbines and solar panels, this must mean there is a lot of wind- and solar-generated electricity running through the wires. In reality, wind and solar, in spite of the gargantuan amounts of money Germany has poured into them, produce relatively insignificant amounts of actual electricity. Hence Germany’s embarrassingly high carbon emissions from electricity: since wind and solar can’t cut it, Germany is building more and more coal-fired power generation stations.

Germany has the second-highest price for household electricity in the EU (only the Denmark price is higher). This is to pay for wind turbines and solar panels, and thereby to reduce carbon dioxide (CO2) emissions from making electricity.. Has that paid off? Not according to this chart. As you can see, CO2 emissions have gone up since 2000. Click to enlarge.

The inefficiency and unreliability of wind and sun as electricity sources also makes them extremely expensive. This is for two reasons.

And why is that? Because wind turbines and solar panels are… inefficient and unreliable. I know this sounds like a tautology, but bear with me.

A wind turbine rated at two megawatts will, over the course of the 8,760 hours in a year, produce mo more than 40 percent of those two megawatts.

The worst thing is, you can rarely tell with precision which hours will give you your 2 MW. And you can never tell more than four hours ahead of time.

In these circumstances, if you are a company that makes its money selling wind power, you must have a government guarantee that if and when you do get power our of your wind turbines you will fetch a very high rate. Otherwise you couldn’t stay in business, let alone earn a profit.

How did I get the Germany CO2 data?

All CO2 estimates in this article, and in the chart above, are based on estimates of CO2 output by different types of combustible fuel generation.

Generation fuel type output in Germany is given in the OECD publication Electricity Information 2013, p. IV.323.

I assigned a top-level emission factor to each of these types. This method is crude and does not account for power conversion technology or operating conditions of each generator, or different characteristics of fuels within the broad categories. But each factor is in a generally accepted ballpark. (For an example, see the International Energy Agency (IEA) publication “CO2 emissions from fuel combustion, 2012 Edition.” On page 41 of that publication, there is a text box that lists average implied emission factors of various combustible fuels for power generation.) I am confident that the emission estimates given here are generally accurate.

Here are the CO2 emission factors I assigned to the four types of combustible fuels that Germany uses to make electricity:

Solar panels get an even worse return in terms of power produced per watt of installed capacity. Solar panes are not quite as unreliable as wind turbines. You at least can be utterly certain you will not get solar-generated electricity at night. You at least know that all of your production will occur during the daytime, actually during certain hours of the daytime, when there is sunlight at a good-enough angle to strike your panel and generate a current.

But that is as good as it gets. You cannot be certain that there will be no cloud cover. If there is, then you have to wait for the next sunny day to get your electricity. This almost-comical inefficiency translates into prices for solar-generated power that are even higher than those for wind.

Denmark and Germany have the highest household prices for electricity in the EU. This is because of all the wind and solar panel they have forced into their systems. The cruel irony is that after all the money they have showered on wind turbines and solar panels, Denmark and Germany still have electricity that is far dirtier than that of France and Finland. Click on picture to enlarge

Germans are realizing this every time they have to pay their power bills. As you can see in the chart to the left, Germany power rates for households are very high. Only Denmark has higher household prices for electricity.

The truly depressing thing is, German electricity became dirtier in 2013, even more so than in 2012. That is because more nuclear power plants were taken offline. Look at the chart “Germany power generation and CO2 emissions” again. See how CO2 trended up when nuclear started trending down after 2010? Well, nuclear trended down further in 2013. According to the Iron Rule of Power Generation, when a 24/7 source of electricity comes out of a grid, another 24/7 source will take its place.

Wind and solar are obviously not 24/7 sources. But coal is. That is what has taken nuclear’s place in Germany.

But German households are still paying top dollar for all those wind turbines and solar panels. This must be galling, especially in light of the fact that, in December, the coldest and darkest month of the year, German wind turbines stood still essentially for days, according to this Die Welt article. I can’t imagine that German solar panels generated much power either. Germany, whose southernmost point is more than 47 °North, is very dark in December.

Talk about money for nothing.

Another truly sad fact is that the money that Germany has squandered on wind and solar has already been enough, to date, to totally convert their electrical grid to CO2-free nuclear power.

So, for the same money they’ve already spent, they could be as close to zero CIPK as a country can get for electricity, and they would not be facing continuing, increasing costs and their current price for electricity would be about half of what it is now.

Not just foolishness, but the failure to recognize foolishness and correct it. Is there a word for that? It’s at least a second order lack of wisdom.

Hmmm… a word for failure to recognize foolishness… how about Francophobia?

Their next-door-neighbor France is coasting along on atomic power, and French households are as you point out paying half what Germans are paying.

I know the French can be chauvinistic and haughty, but this makes them look tame.

“Not just foolishness, but the failure to recognize foolishness and correct it. Is there a word for that?”

Yes – a concatenation of Energiewende and schadenfreude called Energie-fraud.

It looks like Germany’s CIPK will be going up, while they continue to put up wind farms and solar panels. Reducing CO2 doesn’t appear to be the real objective. Other motives must be at play here.

You are absolutely right, reducing CO2 is not the real objective. The real objective is some kind of nuclear-free utopia and they’ll burn through billions of tons of coal to get there.

I seriously wonder if this is really all about France. The French have spectacularly one-upped the Germans in the logic department, with their cheap-and-easy route to very clean electricity. It took France no more than two decades to achieve a system that is five times cleaner than Germany’s. That must rankle.

So the response of the nation that gave Rudolph Clausius to the world was to plunge into wind and solar energy — not only the two least efficient ways of making electricity, but obviously so.

In effect, Germany has cut off its own nose to spite its face.

The kicker is that Germany is plunging back into coal because gas, the fossil fuel of choice for the discriminating “green,” is too expensive.

This is the shining case of the Iron Rule of Power Generation: notice Germany is not foregoing electricity now that nuclear plants have come offline. It’s just getting electricity from another 24/7 source, in lieu of nuclear.

Reducing CO2 doesn’t appear to be the real objective. Other motives must be at play here.

It is, and you can have fun on all kinds of Green-leaning sites by pointing to this fact and asking what the REAL objective is.

Now that sounds like a great idea! Thanks for the tip. 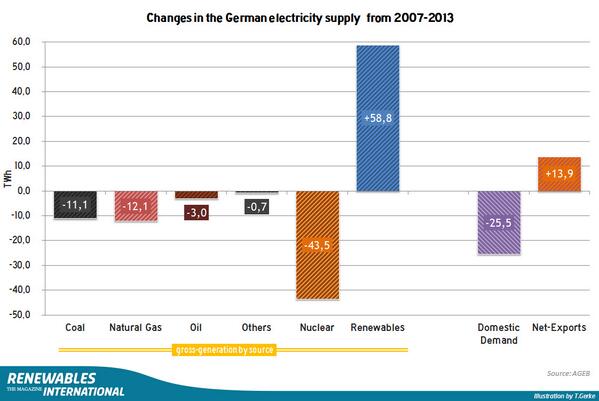 Nuclear produces now ~17% of Germany’s electricity. That will be all closed in the coming decade.
Now renewable produces ~23%, in 2025 that will be 45%.
So share of renewable increases ~22%.
In the same period all nuclear will be closed; a decrease of ~17%. So also in the period until 2025 CO2/GHG emissions of Germany will decrease (with ~5%) while phasing out all nuclear.

Note also that USA CO2 emission is ~10% above the Kyoto 1990 reference, while that of Germany is ~27% below!
So Germany can afford less urgency regarding CO2, as it is the only major country that surpassed the 20% decrease level of Kyoto.

One local resident who touted going “off-grid” because of his personal windmill and solar panels learned a hard lesson this past year. First he lost his solar panels to a powerful windstorm this past summer. Just blew them away. Then his windmill froze up this past week because the lubricating oil for the bearings froze. He will likely tear that down because it will cost too much to replace the bearings and gearbox. So, guess what, he’s back “on-grid”, and lucky to have that.

At http://www.ise.fraunhofer.de/en/downloads-englisch/pdf-files-englisch/news/electricity-production-from-solar-and-wind-in-germany-in-2013.pdf you can compare Germany’s best wind-plus-solar month in 2013 to its poorest (factor of 2.1, December over February).

That Fraunhofer study is illustrative of the capacity factors of wind and solar compared to nuclear. According to page 4 of the pdf, the combined wind + solar capacity is over 68 GW. Germany’s nuclear power capacity is only 12 GW, but page 5 shows the nuclear plants generated more electricity than wind + solar combined. (92.3 TWh vs 76.9 TWh).

Nuclear only has 1/5 the capacity, but generated 20% more electricity.

Germany’s current nuclear power capacity can be found here:
http://www.world-nuclear.org/info/Country-Profiles/Countries-G-N/Germany/
(Currently 12 GW [12,000 MW] since 8 of the plants were shut down in 2011)

Steve,
You may calculate with: “Biofuels and waste = 700 grams CO2/KWh”, but that is not in line with generally accepted standards.

Biomass(-fuel) and waste are generally considered to be renewable as CO2 was bound by it recently.

Steve,
Regarding the costs of that the German household pays for electricity (~28cent/KWh):
About have are different general taxes (we in Netherlands have no renewable policy but also pay ~50% of our 22cent/KWh for taxes).

About 6cent (~22%) is for the Energiewende (contribution for wind+solar+storage).

The Germans do not consider it a problem. Partly because:

– They realize that the 14cent/KWh general taxes will have to be paid anyway to government (via income tax, etc) as government uses that for social security, education, etc.

– They feel proud about the Energiewende which takes nuclear out (Chernobyl did harm German health substantially. E.g. fetuses:
http://www.helmholtz-muenchen.de/ibb/homepage/hagen.scherb/CongenMalfStillb_0.pdf

Public support for the Energiewende grew from ~55% (year 2000) gradually towards 90% now. That is substantial more than in any country for nuclear.
So German decision makers must have done something good.