U.S. policy for preventing nuclear weapons proliferation is a two-pronged work in progress. Prong One is essentially intellectual property protection: blocking certain other countries from access to technologies and processes that can help make explosives and bombs. Prong Two is dissuasive diplomacy: using various forms of diplomatic pressure, up to and including military force, to dissuade countries from making, getting, or keeping weapons. I’ll describe the two prongs in reverse order.

Prong Two emerged in the 1960s with the advent of the Treaty on the Non-Proliferation of Nuclear Weapons (NPT). For its first four decades it was entirely composed of peaceful diplomacy. Only recently did it involve outright military force, with the U.S. invasion of Saddam Hussein’s Iraq in 2003. 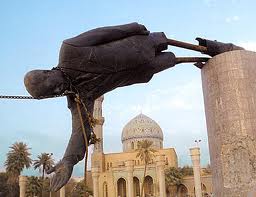 The fall of a nuclear weapons aspirant: Saddam’s statue is pulled down in Baghdad, April 2003. Watching from Tripoli, Libya, Muammar Gaddafi began to wonder if his own nuclear weapons program might lead to a similar scene. Six months later, he publicly renounced nuclear weapons. His “reward” in 2011 for that wise and unprecedented decision very closely resembled Saddam’s punishment.

Has Prong Two been effective? It certainly produced huge results through non-military diplomacy, very soon after the Cold War ended. The newly independent countries of Ukraine, Belarus, and Kazahkstan had inherited thousands of Soviet nuclear weapons; the U.S. successfully negotiated the smooth transfer of these weapons to the new Russian Federation, thereby peacefully removing three heavily armed new nuclear republics from the list of weapons states. The U.S. also negotiated deals with Russia that saw Russia dismantling about 11,000 uranium weapons and shipping the uranium to the U.S. where it is now powering most of the fleet of electricity generating reactors. Another deal involving weapons plutonium was signed in 2000; an Areva-Shaw joint venture is building a facility to turn 34 tons—8,500 bombs’ worth—of U.S. weapons plutonium also into electricity.

Prong Two was also undeniably successful in the case of Iraq, though it is debatable whether the game was worth the candle. Today’s Iraq will certainly not, for at least the foreseeable future, reconstitute the nuclear weapons program that Saddam had launched in the 1970s and built to enormous scale by the early 90s. The Iraq invasion produced another direct Prong Two success. Today’s Libya is also very unlikely to reconstitute Muammar Gaddafi’s less-well-formed uranium separation program, which Gaddafi formally abandoned only six months after the Iraq invasion. Two nuclear programs were thereby stamped out by that one action.

But Iran and North Korea remain uncowed, despite heavy U.S.-led sanctions and constant public diplomatic pressure. Time will tell if Prong Two is effective in the case of Iran and North Korea. (Israel has of course pursued its own military Prong Two, having destroyed Saddam’s Osirak reactor in 1981 and Bashar al Assad’s al Kibar reactor in 2007.)

Prong One has existed since the Manhattan Project, the U.S.-led Second World War effort to develop the first atomic bomb. As I noted, Prong One is fundamentally based on intellectual property protection, relying on tight control of the technologies and processes that turn nuclear materials into weapons. Prong One from its inception rested on the mistaken assumption that America could maintain its monopoly on weapons, even though many of the scientists who had helped America develop the atomic bomb during the war did not share the belief that America should have a bomb monopoly in the first place.

Prong One was a failure even before it was officially articulated. The USSR successfully tested its first bomb in 1949; that device was a near-exact copy of the Fat Man that destroyed Nagasaki in 1945. It was a near-exact copy because at least two of the Manhattan Project scientists, Klaus Fuchs and Ted Hall, had given the Soviets most of the details of its design.

Three more countries joined the nuclear weapons club in the years after 1949: the United Kingdom in 1953, France in 1960, and China in 1964. Like the Soviets, these next three were direct beneficiaries of the Manhattan Project: British and French scientists had worked on the Manhattan Project, and headed up their countries’ efforts; the Chinese were aided by the USSR, prior to the Sino-Soviet rift in the late 1950s, and apparently also Klaus Fuchs.

So, by 1964, all of the United Nations Security Council Permanent Five (P5) member countries were nuclear weapons powers. Other states have joined, or come close to joining, the weapons club since then:

An eighth country, Iran, stands today at or close to the threshold of weapons capability. The centrepiece of Iran’s weapons effort is its apparently very well developed program of uranium isotope separation, based on centrifuges. It is suspected that in this area Iran received much assistance from Pakistan.

If the rapid spread of nuclear capability from the U.S. to the rest of the UN Security Council P5 by the early 1960s does not prove that it is impossible to put the nuclear genie back into the bottle, the latter eight examples ought to. None of the latter eight countries acquired critical technology through a modern commercial nuclear cooperation agreement. All of them prove that a determined country, even if it has to eat grass, can develop a nuclear weapon. Prong One of America’s anti-proliferation strategy is based on premises and assumptions that have been so utterly disproved that it would be comical if the subject were not so serious.

A major Prong Two initiative, the above-mentioned 2000 agreement with Russia in which the U.S. and Russia each pledged to destroy 34 metric tons of weapons plutonium by burning it in electricity-generation reactors, is facing a serious threat in the current budget crisis. Incredibly, the plant the Americans are building to fulfil their end of the bargain is the object of continual criticism from the self-styled anti-proliferation lobby. That crowd is the biggest reason Prong One continues to be advanced as a credible way to prevent proliferation, even though we are still waiting to see a Prong One success.

I will deal with this in my next article.

well, they successfully fired off a few bombs within weeks of India doing so. Moreover, immediately after the Indian “events” Pakistan announced it would soon be responding in kind. You don’t make that kind of announcement unless you are totally confident your response won’t be an embarrassing misfire, and you don’t have that kind of confidence unless you’ve tested your device.

As for when exactly Pakistan tested the device it fired in 1998, I am combing my notes to find where I came up with 1987 — and I’m still looking. Thomas Reed and Danny Stillman in The Nuclear Express give a number of reasons why they think that test was in 1990.

For me the key word is being responsible for any nuclear weapons you create, and publicly let all countries know in no uncertain terms that an automatic forfeiture of national territory exists if the origin of an unprovoked detonation on one’s soil is ascertained. Surrender vast tracks of your country to internal stateless peoples in exchange for war. Korea and Iran’s leaders might be crazy enough to nuke someone under the table and bask the honor of being blown up, but would they feel even more horrified if say the Kurds were officially “rewarded” a hunk of your country in place of a retaliatory nuking or war? I think the citizens of a loon’s country would have a loud say over their leaders over that choice — or setting such up to occur. As for terrorists getting their paws on WOMs, I think we ought stop playing PC games and take off the gloves and go total “surgical” covert extermination on them. Make it fatal for them to even think of planning to waste us. Since Putin got full behind the wheel after that school, no terrorist dares to be a gopher head over there. Of course the devil is in the details…

0
Reply
Item A1 Current concentration of CO2 in the global atmosphere:
421.10 parts per million
In the last hour:
This content is updated at 50 minutes past the hour. Refresh at that time to see latest available data. Sources: www.ieso.ca and EmissionTrak™