On Family Day, I had a brief but pithy discussion with several family members about what was the greatest technological development of all time. One of my brothers offered cinema as Number One. Someone else said the internet. I won’t disagree that those were blockbuster inventions. But my vote was for the electricity grid. And I will explain below why I stand by my vote. 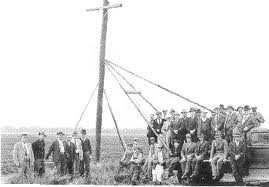 The wires that saved the country. Rural electrification in the middle part of the 20th Century saved millions of people from a life of medieval drudgery. The expansion of the grid coincided with the movement for the emancipation of women: the latter drove the former. This is why the electricity grid is the greatest invention in history.

This Sunday, March 3 2013, is the 100th anniversary of a women’s march on Washington D.C. It seems incredible today that women were not legally allowed to vote in the U.S. in 1913. Hence the march, the object of which was to pressure president-elect Woodrow Wilson to give women the franchise. The march turned so violent that Secretary of War Henry Stimson (yes, the same Henry Stimson who as secretary of war in 1945—32 years, two world wars, and 6 presidents later—authorized the nuclear attack on Japan) ordered in the cavalry the next day to secure the parade route in expectation of even worse violence. This was a jolting, formative event in America. Seven years later, in 1920, American women won the right to vote. Canadian women won it a year earlier.

This anniversary is getting some attention in the U.S. media. Not enough, in my opinion. I am not American, I am Canadian. But my mother, who emigrated to Canada in 1935 from Ukraine, was in the women’s movement of which the 1913 march was an early and seminal event. She emphasized to me and my two brothers during our upbringing the importance of equality in family life. It is vitally important.

My mom knew from first hand experience what it was like when household work was divided along gender lines. A year after my mother emigrated to Canada in 1935, she and her parents and siblings moved to a farm near Montreal. There was no electricity. Tasks that I can do today with ease, such as laundry, were done by hand. The women’s movement was still in its infancy; this drudgery fell to the household women, including my mom. She still remembers helping her mother, my grandmother, wash the family laundry.

If you think hand-washing laundry is easy, try it. It is not easy. It was an almost-daily job in my mother’s household, and left her mother, my grandmother, exhausted. My mother commented about it on one of my posts which featured a Hans Rosling TED talk about the impact of electricity on his family.

This was the lot of millions of farm families in western countries in that period. (It is still the lot of rural families in today’s China, where as recently as 2004 three out of five rural households did not have a washing machine.) This is why there were massive programs to expand the electricity grid to rural areas. The women’s emancipation movement, which by the time I was a kid was called Women’s Liberation, was one of the critical factors driving rural electrification. Here is a passage from the first volume of Robert Caro’s epic biography of Lyndon Johnson. It covers LBJ’s career as a Texas congressman during the late 30s (around the same time my mom’s family moved to the farm). Johnson’s landmark early work was on rural electrification. Caro writes

Because they had no electricity, [Johnson’s Hill Country constituents] were still doing every chore by hand, while trying to scratch a living from soil from which the fertility had been drained decades before. They were still watching their wives made stooped and old before their time by a life of terrible drudgery, a life that seemed, as one Hill Country woman put it, ‘out of the Middle Ages.’

Caro refers to Texas farm wives as though they were separate from LBJ’s male constituents. But as I have noted, women had won the right to vote in 1920. Is it possible that LBJ, who knew how to win votes, pushed for rural electrification as hard as he did because he understood the dynamics of household decision making?

Regardless, the situation was the same in rural Quebec at around the same time. That wife “made stooped… by terrible drudgery” was my grandmother. That life was the one my mom, and her family, led in rural Quebec in the late 1930s. Life without electricity is not romantic. It is medieval drudgery.

This is why I think the electricity grid is the greatest invention of modern times. It provided a technological solution to the intractable problem of inequality in household labour.

It is also why my blood boils when I hear people advocating that electricity be made more expensive, more scarce, as if electricity is an evil of modern life. My mother is 80 today. She lives in a downtown Toronto high rise. She enjoys a modest middle class standard of living by the standards of an affluent western country, which is what her parents were seeking when they emigrated from Ukraine in the mid-1930s. Her standard of living depends utterly on the availability of reliable, affordable electricity. She, and all other people in Ontario, should have cheap electricity.

Warning: file_put_contents(): Only 0 of 16186 bytes written, possibly out of free disk space in /home/cana7952/public_html/wordpress/wp-content/plugins/wpdiscuz/utils/class.WpdiscuzCache.php on line 148

Warning: file_put_contents(): Only 0 of 422 bytes written, possibly out of free disk space in /home/cana7952/public_html/wordpress/wp-content/plugins/wpdiscuz/utils/class.WpdiscuzCache.php on line 148

Warning: file_put_contents(): Only 0 of 444 bytes written, possibly out of free disk space in /home/cana7952/public_html/wordpress/wp-content/plugins/wpdiscuz/utils/class.WpdiscuzCache.php on line 148

Warning: file_put_contents(): Only 0 of 300 bytes written, possibly out of free disk space in /home/cana7952/public_html/wordpress/wp-content/plugins/wpdiscuz/utils/class.WpdiscuzCache.php on line 148

Warning: file_put_contents(): Only 0 of 5870 bytes written, possibly out of free disk space in /home/cana7952/public_html/wordpress/wp-content/plugins/wpdiscuz/utils/class.WpdiscuzCache.php on line 148

Warning: file_put_contents(): Only 0 of 443 bytes written, possibly out of free disk space in /home/cana7952/public_html/wordpress/wp-content/plugins/wpdiscuz/utils/class.WpdiscuzCache.php on line 148

Warning: file_put_contents(): Only 0 of 11342 bytes written, possibly out of free disk space in /home/cana7952/public_html/wordpress/wp-content/plugins/wpdiscuz/utils/class.WpdiscuzCache.php on line 148

So what you’re saying is you’re above the “Wash Line”? 🙂

I dislike the word “cheap”. I much prefer to say “Inexpensive”.

However it’s still beaten by running water. I lived one week-end in my home without electricity, and a single day without running water, and the difference in priority is obvious. Even though I started the no-water day by buying two gallons of bottled water.

well not to quibble but water is pretty much impossible in modern cities without electricity. You need power to purify and heat it, and to deliver it to highrise floors that are above the municipal pressure level (usually around 12 storeys).

Water weighs a kilogram per liter and you need a kilocalorie to heat a kg by just one degree C when in the liquid state. That’s a lot of energy. If you can stomach more of my self promotion, check this out.

Steve – Another fine example of why I consider you a friend, even though we live a thousand miles from each other.

Rod, thanks and likewise. I have special memories of LBJ: he was the first president of whom I was aware. He was often referred to (not flatteringly) in protest chants at Vietnam War rallies I attended with my dad. My dad and I recently watched a photo anthology of LBJ, and it was a rather nostalgic experience — especially listening to the accounts of his work as a congressman. There was humanity in those efforts, and electrification is for me the really tangible part of that, especially having listened to my mom’s accounts of her rural childhood. As you point out, this was the basis of LBJ’s political career.

If you knew a little more about power you would understand that it is not the grid that is important it is power. You would understand that the sun gives us enough power in a day to power all of our needs for a year. You would know but maybe you don’t care that the gird is antiquated and has been completely unnecessary for most of the last 50 years and has in fact impeded our progress power wise. If we had not invested our future in nuclear for example each home would likely have plants and food growing around and on it and there would be a solar panel and a wind turbine which together with bio technology could easily keep your dear Mother and her entire building not only heated and lit but fed.

Alice, and if we only did what you advocate we would only need a few perpetual motion machines for the times when, you know, the sun isn’t shining.

ah the renewables supporters. Here’s a business idea. Start a marine shipping company that uses sail powered ships. I mean, it’s free fuel, right? You should be able to undercut your competitors. Let us all know how it works out.