As we all head into the allegedly merriest but unquestionably darkest part of the northern hemisphere year, it might be instructive to read, critically, between the lines and past the buzzwords, the self-congratulatory (and effective) 2015 Corporate Social Responsibility Report from Loblaw Companies Limited.

A lot of us will be dropping by some Loblaw grocery outlet somewhere in Ontario to top up the Christmas supplies. In 34 pages of slick promotion, Loblaw wants us to know we will be buying ethical, green groceries. The company really pats itself on the back. Company president Galen Weston makes it clear his outfit has ticked every box in every category near and dear to the heart of whatever eco-minded postmodern might chance upon the report.

On the environment, Weston says:

i.e., a big CHECK next to each of these. And a big gold star for Loblaw—even if the Loblaw team ventured to Paris (and back) on a kerosene powered airplane.

In the Energy Efficiency section on page 14, there is a list of allegedly efficiency-related measures the company has taken. The last item in the list reports that Loblaw:

Loblaw has certainly been going to town putting solar panels on its store roofs. According to the IESO’s Active Generation Contract List, a data dump consisting of an Excel spreadsheet that contains summary details on thousands1 of contracts the IESO now oversees, there are 23 FIT projects associated with Real Canadian Superstore (a Loblaw brand). These 23 installations represent a total of 7.2897 megawatts installed capacity.

The most recent in-commercial-operation date in the RCS list was October 1, 2014. The FIT rate for roof-mounted solar more than 100 kilowatts and less than or equal to 500 kW was 31.6 cents per kilowatt-hour.

Let’s give Loblaw an annual capacity factor of 15 percent for these 23 roof-mounted solar systems on these 23 Real Canadian Superstores.2

Multiply the reported capacity from the table above by 8,760 hours per year then by 15 percent then by the FIT rate. Since 2014, those 23 RCSes have collectively brought in more than $3 million a year from their panels.3 And who has paid those $3 million each year to Loblaw for the “green” energy that could have been purchased far more cheaply by simply buying Ontario hydro or nuclear power, which is at least five times less expensive? Why you, me, and thousands of Ontario electricity ratepayers. Including every RCS customer who pays an Ontario electricity bill.

This is what Loblaw considers corporate social responsibility: profiting from a totally unnecessary and obviously greenwashed government-mandated get-rich-quick scheme that was designed to line the pockets of those who possess real estate and can borrow lots of money.

Every RCS I have ever shopped at has a major natural gas hookup. RCSes are heated using natural gas, which is a fossil fuel that emits huge amounts of carbon dioxide as well as air pollution like nitrogen oxides and carbon monoxide. Did Loblaw install the solar panels on its store roofs so as to decrease its use of natural gas? Not on your life. Every watt of solar power generated by those panels gets priority injection into the Ontario electricity grid, where we ratepayers are forced to buy it whether we want to or not.

For example, the RCS on Innes Road in Ottawa: this is a big complex with over 13,100 square meters of space. Its outdoor-facing dimensions are approximately:

This store has 494 kilowatts of solar panels on its roof, says the above filtered IESO contract list. At the peak insolation hour (which in Ottawa at Christmas-time is around one p.m. and doesn’t last even an hour), could these panels heat the building? 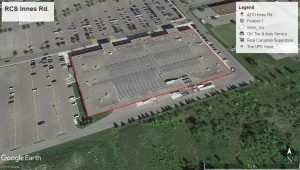 The Real Canadian Superstore on Innes Rd. in Ottawa, from Google Earth. The solar array on the roof is reported to be 494.9 kilowatts. When the panels are producing electricity, Ontario ratepayers are paying 53.9 cents for each kilowatt-hour. Nuclear costs less than one-ninth of that, hydro less than one-tenth. Though solar is allegedly green, this store is heated with natural gas, a carbon-heavy fossil fuel. Why? Because natural gas costs one-fifteenth what the panels fetch. It is more lucrative to sell the solar electricity to a market that has no choice but to buy it.

It is difficult to say. I do not know the U factors for the above-mentioned building elements. But why don’t I give the roof, floor, and non-windowed wall areas a U factor of 0.3, and the windowed storefront a U factor of 1.5. On that basis, the Innes Road RCS had a heat demand at one p.m. on Wednesday December 13 of around 468 kilowatts.4

So conceivably the solar array on the roof could at that moment have provided more than enough power—if the sun had been out (which I think it was not)—and if my U factor estimates are close.

But more to the point, even if the panels were capable of heating the place for even a single hour, they most certainly cannot provide heat through the day, no matter how sunny it is.

With this in mind, would Loblaw ever have installed them on the roof for that purpose?

The answer is obviously no. Those panels are there for two reasons, neither of which has anything to do with providing the energy that keeps the building habitable in winter:

By the way, the Ottawa Innes Road RCS solar installation fetches a rate of 53.9 cents per kilowatt-hour.

Low-income Ontarians, you are paying for that solar power. Remember that the next time you open your electricity bill and wonder why it is so high.

I did note, didn’t I, that the IESO active generation contract list grew by nearly 400 between April and the end of September 2017?

The most beneficial aspect of their rooftop solar is someone will get a job clearing them of snow in the winter. Our municipality has two large rooftop pv arrays getting ~$.72/kwh. They were totally snow covered for 10 days this month till we got a thaw. Jan. production is typically only 1/10 that of June.
Reality is their pv almost certainly has higher life cycle emissions than On’s nuclear/hydro generation. It may reduce some daytime NG use but will likely actually lead us down the road to more fossil reliance as pv will always go MIA at our evening peak.
Too bad they didn’t team our crazy low emissions electricity with the best heat pump technology and get off their NG heating. That would have really helped everybody. Instead they virtue signal with the cost of their expensive bling dumped onto ratepayers.
Next they will try to suggest their newly ordered fleet of electric transports trucks (with big prov. subsidy) are powered by their rooftop solar (also subsidized by public purse). Rent seeking at every opportunity for sure.

of course they will claim everything is solar powered. Solar enthusiasts crow about solar power all through the northern hemisphere winter night!

Solar is a direct and unequivocal cause of increased natural gas usage. Because it adds enormous cost to the electrical grid, which is recovered by jacking up retail rates, solar makes natural gas heating the only sane choice in places where gas is available.

comment deleted by moderator, commenter is now blocked. I warned you.

You got me curious enough to query the contract data in an attempt to locate more Loblaws locations.
I got to 55 by including Zehrs, Loblaws, Your Independent Grocer and No Frills stores – in addition to RCS. All installs after the initial 3 are by “Fireleight Solar L.P.”
All locations were contracted in 2010, and I think that’s the pertinent data for rates (not the commercial operations date). I had noted Feed-in tariff rates for that time as $635/MWh for capacities above 250 kW and $713/MWh for those below 250.

The 55 sites I note have a contracted capacity of 13,069 kW, and at 15% annual capacity factors would generate $11.224 million of annual revenue.
The data is saved at https://goo.gl/iVEETH

I am amazed and a bit outraged to hear that the 2010 contract rate is the one that applies and not the commercial operation date. Ontario just bent over backwards to get these characters into our electricity system, and is still letting them in.

Do you know if every single KWh generated sold at the contract price or only the excess that isn’t used by the store?

If they used their own solar-generated power for the store, that would be Net-Metering. They certainly would not get the quoted rates for the excess production. But they would still cause all sorts of down-line costs that are paid by all of us, but rarely mentioned.

Solar FIT electricity all goes into the grid, and we ratepayers pay the contract FIT rate for every kilowatt hour. Scott Luft notes that the rate Loblaw obtained was >70 cents (far more than the 53.9 cents I mentioned).

Loblaw would never ever have wasted a single dime installing solar panels had FIT not existed, i.e. without that astronomical 70 cent rate. The whole point of FIT was to guarantee profits to solar producers. Otherwise, there would be no solar on our grid. The only way to guarantee that profit is via astronomical rates. The early adopters (like Loblaw) got rates that were more astronomical than the late adopters.

Loblaw’s strategy appears to be:

Why is everyone here jumping all over Lawblaws for taking advantage of policies that were set in place as government incentives? I understand that the incentives are hurting everyone and are downright stupid, but that is not Lawblaws fault nor should they be expected to miss out on a profitable situation. Take a look at your own options for heating your home? Do you use highly inefficient electric base bards on principle or does you high efficiency forced air furnace use natural gas?
I feel the only way to fix these clear problems is to have checks and balances in place with our elected officials and not allow them (without personal repercussions) to push agendas that are not good for the tax payers. Unfortunately such things are not so easy to implement.
In the end I don’t feel it is fare or a mature position to point accusing fingers at a capitalistic company in a free society and are doing the very thing they set out to do. Make a profit.

Absolutely agree it’s the government that set this up in the first place and that deserves most of the blame.

But no it’s not unfair or immature to finger rentseekers like Loblaw. Their business is making a profit from selling food, and I have no problem with that as long as they do it without flouting rules (like they’ve admitted they did in the bread scam).

With electricity, nobody had a gun to their head forcing them to take advantage of this idiotic program. It was free money from ratepayers who have no choice but to pay it, and they stampeded into the phony green economy only because of the profit — as I’ve pointed out, they don’t even use this allegedly green energy, they use fossil fuels.

That’s sleazoid rentseeking, from an already rich company trying with fancy greenwash brochures to get us to believe the opposite.

Maybe Loblaws could come out with a new Green Line of upscale food products. These would be processed products made with the solar energy generated from their store rooftops. Given the high electricity input cost, the Green Line products might cost 10-20 times as much as regular products. However, I am sure that lots of virtue-signalling, progressive Loblaws customers will be keen to fill their shopping baskets with these products.