Angela Merkel is as dexterous and tough in domestic affairs as Bismarck was in foreign affairs, so I mean no disrespect to her or any German when I give her Bismarck’s nickname The Iron Chancellor. I mean quite the opposite: absolute respect. She is impressive. 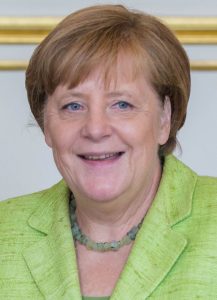 The Iron Chancellor’s modern-day [nick]namesake. Attempting to continue the public electricity philosophy that came into being under Bismarck, the importance of the reliability of German grid electricity is her focus right now.

Merkel is right now fighting for her political life, trying to come up with some sort of policy that buttresses up her left flank in negotiations with, among others, the Green Party—a party made up of individuals for whom I have difficulty mustering any respect—so as to form a federal government after September’s inconclusive election. The Iron Chancellor is very likely trying with all her might, at this very moment (1631 UTC, November 17 2017), to explain the Iron Rule of Power Generation to people who have dedicated careers to dismissing it. 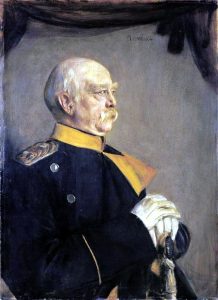 The original Iron Chancellor. Under his tenure, in the capital city of the empire he helped create, the world’s first regulated electricity system was launched.

The Iron Rule of Power Generation, as I have framed it in numerous articles, says that you can only replace a baseload power source (that is, a source that generates bulk electric power in the range of many thousands of megawatts, 24 hours a day 7 days a week) with another baseload source.

The Iron Rule is why Germany dumps so much carbon dioxide (CO2) into our air, upwards of 300 million tons per year, from power generation. Though I have criticized German climate policy, or rather what I see as German preference for talking about climate policy over doing something about it, I should grant that I honestly believe Germans, even those in the Green Party, want to do something meaningful about climate policy, i.e., that they actually want to reduce those frankly obscene 300 million tons per year as much as possible.

In the case of Germany, and Merkel’s prospective coalition partners who are in the Green Party, the something they want even more than reducing the obscene 300 million tons per year of carbon pollution that their policy positions are causing to be dumped into the global atmosphere, is no nuclear generation whatsoever to be present in the national grid electricity mix.

This is the Iron Rule. Take out nuclear, and your choice is coal. And if you don’t like the CO2 that comes with coal, then your choice is nuclear. Period. End of story.1

Merkel’s efforts to impress this bit of reality upon her Green interlocutors are likely proving extremely frustrating. She is in this position because she was forced to cave to opportunistic and irresponsible Green Party fearmongering following the Fukushima meltdowns of 2011 and agree to reverse her rescinding of her predecessor’s nuclear phaseout. Here she is today, trying to persuade the same Green Party that if it can’t be nuclear then it’s either coal or lights out, literally. Either that or go to France cap in hand, and beg for (nuclear generated) imports of French power.

Moreover, the Greens’ only contribution to the zero-carbon energy debate was to demand the energiewende, which forced wind turbines and solar panels en masse into the country’s grid. This was an embarrassing and totally predictable failure, both economically and environmentally. Merkel rammed that into Germany’s national policy, at the Greens’ demand, only to have them now demand that coal, the only thing that prevented the German grid from blowing up, also be removed from the system.

There is probably some serious game theory going through Green minds. If they rebuff Merkel’s attempts to persuade them that they can be anti-nuke but not anti-coal, i.e. that they simply cannot suck and blow at the same time, i.e. that they cannot buck the Iron Rule of Power Generation, and cause her to fail at forming a government, thereby forcing the country back to the polls only to get a worse result than they got in September… well they will have some egg on their face.

But if they get a better result than September… .

Merkel, playing these scenarios out in her own mind, should try rolling out the Kahneman and Tversky, who showed that framing decisions in terms of loss tends to produce conservative decisions.

Warning: file_put_contents(): Only 0 of 1605 bytes written, possibly out of free disk space in /home/cana7952/public_html/wordpress/wp-content/plugins/wpdiscuz/utils/class.WpdiscuzCache.php on line 148

Warning: file_put_contents(): Only 0 of 326 bytes written, possibly out of free disk space in /home/cana7952/public_html/wordpress/wp-content/plugins/wpdiscuz/utils/class.WpdiscuzCache.php on line 148

Warning: file_put_contents(): Only 0 of 568 bytes written, possibly out of free disk space in /home/cana7952/public_html/wordpress/wp-content/plugins/wpdiscuz/utils/class.WpdiscuzCache.php on line 148

Yes, it is as simple as that actually. for me, agreeing with the iron chancellor. I also would rather go green and just like what I got, the solar energy (Reboot Solar). Getting more benefits than any other else.