Nuclear energy’s biggest competitor by far suffered yet another lethal tragedy yesterday. A natural gas leak at the Minnehaha Academy, a Christian school, led to an explosion that killed a receptionist and another staffer and hospitalized nine others. 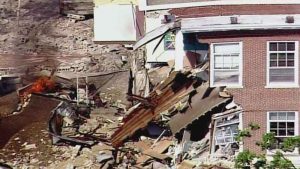 No, this isn’t Aleppo or Mosul. It’s Minneapolis, MN USA. This is what happens (frequently) when natural gas, which is used to heat buildings like this, leaks into the local environment and encounters a spark.

Luckily for the natural gas industry, the mainstream media treated this like a fatal car accident: something tragic and unfortunate that gets a bit of (mostly local) coverage but because it happens all the time fades quickly from newscasts.

Had this tragedy had any link whatsoever with nuclear fission, natural gas’s competitor in the electric power and heat generation markets, the media story, and level of media coverage, would be as different as night is from day. Every mainstream media (MSM) vehicle on the planet would be mining the vacuous anti-nuclear science fiction meme for all it’s worth, putting every professionally dissembling anti-nuke Chicken Little pundit—Michio Kaku, Arnie Gundersen, Helen Caldicott, Arjun Makhijani, and every other clone from every single green NGO—onto every interview, panel, and call-in show from northern Scotland to southern Australia.

(I know, I’m ad hominem. But it’s not like the four individuals named above don’t make a living from trotting out anti-nukery that is demonstrable bunkum.)

And how long would this gong-show last? Well, let’s look at the only nuclear “disaster” the MSM has had the opportunity to milk in the past few decades. I am talking about Fukushima, of course. Fukushima is a nuclear power plant in northeastern Japan, where a 2011 tsunami, triggered by one of the most powerful earthquakes in recorded history, wiped out a string of coastal communities and killed upwards of 20,000 people.

That’s not what got the MSM’s attention, though. Three reactors at the nuclear plant melted down because the tsunami knocked out their backup power; the meltdowns happened because the loss of backup power made them unable to circulate cooling water around the reactors.

Anti-nuclear pundits, including the four named above, predicted untold calamity because of ionizing radiation from the meltdowns. But in fact the meltdowns have led to zero casualties.

That was 2,337 days (six and a half years) ago. Google “fukushima,” and sort your results by year. As far as the MSM is concerned, this is the gift that keeps on giving. There are zillions of stories about Fukushima. (Are there more stories about Fukushima than about the 20,000 people who were killed by the tsunami? I wonder. I’ll get back to you on that.)

Google “Minnehaha gas explosion” and you’ll get some results, but nothing like Fukushima. Wait six and a half years and try again, and—unless there’s another gas explosion in Minneapolis, which is statistically far likelier than any kind of nuclear accident anywhere in the world—you will get about the same number of results as today.

And guess what. More people died yesterday in the Minnehaha explosion than have died from the effects of Fukushima-related ionizing radiation in the 2,337 days since the Fukushima meltdowns. Of the innumerable MSM reporters who have covered this, only a very small few—Miles O’Brien, science documentary maker and chief science correspondent of PBS stands out among them—have emphasized the casualty-free nature of the incident.

And if nobody had died in the Minnehaha explosion but the same number of hospitalizations (nine) had occurred, the Minnehaha casualty count would still be higher than Fukushima.

The MSM openly plays favourites in the energy markets.

Guess who its favourite is.

← Drawing down on irony, or, the proper way of campaigning for clean air: comparing two books on how to make our air cleaner
Bitcoin brute-force validation: made for nuclear power and—in Ontario—re-regulation of electricity →
0 0 votes
Article Rating
Subscribe
Login
3 Comments
Oldest
Newest Most Voted
Inline Feedbacks
View all comments

Warning: file_put_contents(): Only 0 of 6485 bytes written, possibly out of free disk space in /home/cana7952/public_html/wordpress/wp-content/plugins/wpdiscuz/utils/class.WpdiscuzCache.php on line 148

Warning: file_put_contents(): Only 0 of 328 bytes written, possibly out of free disk space in /home/cana7952/public_html/wordpress/wp-content/plugins/wpdiscuz/utils/class.WpdiscuzCache.php on line 148

Warning: file_put_contents(): Only 0 of 3072 bytes written, possibly out of free disk space in /home/cana7952/public_html/wordpress/wp-content/plugins/wpdiscuz/utils/class.WpdiscuzCache.php on line 148

An accident that came to my attention recently was the San Juanico (Mexico City suburb) liquified petroleum gas explosion of Nov 19 1984. 500 to 600 deaths, 300 corpses never identified! How many, like me, had never heard of it or had forgotten it as just an unpleasant part of industrialization.

Hadn’t heard of this — wow. According to this article abstract, one of the explosions registered 0.5 on the Richter Scale.

So at least 500 people killed, nine times as many as Chernobyl two years after. Chernobyl is a household word, I never even heard of San Juanico until today. Why aren’t there activist groups out there campaigning to rid the world of propane?

Remember the propane BLEVE that killed those people Toronto in 2008?

Anyone in Hydro One’s service area with the capability and money is trying to get onto propane for heating/cooking/refrigeration, because electricity has become so expensive.

Expensive electricity is applauded by anti-nukes who apparently couldn’t care less that it is driving poor people to use a proven deadly dangerous alternative fuel.

I worked up north back when Nunavut was still NWT. Propane was the “drug” of choice for poor bored troubled kids — they would wander around with canisters of propane, inhaling the stuff to get high. Propane abuse was as rampant then as fentanyl is now. It killed lots of people. I don’t recall any campaign to ban it.

A 1992 forest fire at Burnt Mountain Alaska brought attention to the USAF’s array of RTG-powered seismographs (the “verify” part of Reagan’s Test But Verify slogan regarding the US-Soviet nuclear test ban treaty). Of course anti-nukes glommed onto the RTGs as the worst thing ever. They convinced local aboriginals to pressure the USAF to switch to a “safer” fuel, so the USAF switched to… propane, a demonstrably far more dangerous fuel that has killed and maimed people and wreaked social havoc in communities all across the North.

Somehow that is seen as preferable to RTGs, which pose no threat at all to anyone who is not determined to systematically dismantle them and eat the solid ceramic Strontium Titanate pucks that are their fuel source.

There is an interesting parallel with other issues:
“The most criticised societies in the world will be the least criminal societies.”
http://markhumphrys.com/laws.html#no.1

I’m not sure if this observation is any help in reducing either biased reporting.