As I write this, outdoor temperatures in Edmonton and Calgary, Alberta’s two biggest cities and home to 44 percent of the province’s residents, are -16°C and -13°C respectively (3.2°F and 8.6°F).

The provincial wind-powered electricity generating fleet, enthusiastically touted by political, media, and environmental elites as the wave of the future, is producing a whopping 9 megawatts of electrical power. That represents 0.09 percent the total in-province power generation. That’s right—the energy of the future is, right now, producing not even one-tenth of one percent of the electricity that the province needs. 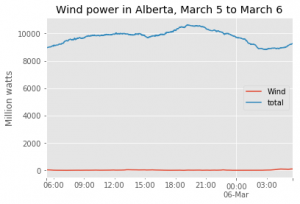 Sticking just with heat: let’s say you are in Edmonton, where at six a.m. Mountain Time it was minus 16 C. Walk outside and stand there. Take a heat source that gives off about 14 watts, turn it on (or light it). How warm does it feel? On a scale of one to ten, how adequate would you say it is as a heat source?

Why 14 watts? I estimate that to prevent fatal hypothermia in the circumstance of a minus 16 ambient temperature, you would need a heat source that gives out something like 15 kilowatts. This assumes you are outside, and relatively unsheltered, but out of the wind. Fourteen watts is 0.09 percent of the required heat. It represents the proportion of Alberta’s electricity that the wind fleet contributed at six a.m. Mountain time. Which begs the obvious question: if wind is so inadequate at meeting current electricity needs, then how could it possibly provide enough electricity to cover the heat demand as well?

Hint: a lit candle gives off something on the order of 70 watts. Your 14-W heat source is giving off one-fifth the heat of a lit candle.

Hint #2: think of how likely it is that a lit candle would keep you warm outside in minus 16.

Now, relocate as quickly as you can to Grand Prairie, where it is minus 31. How’s that candle working out?

Think of this the next time you hear a politician or environmentalist talking about how Alberta needs more renewable energy.

Real money is being spent to build more wind turbines in Alberta.

That is called Picking the Losers.

Warning: file_put_contents(): Only 0 of 7969 bytes written, possibly out of free disk space in /home/cana7952/public_html/wordpress/wp-content/plugins/wpdiscuz/utils/class.WpdiscuzCache.php on line 148

Warning: file_put_contents(): Only 0 of 445 bytes written, possibly out of free disk space in /home/cana7952/public_html/wordpress/wp-content/plugins/wpdiscuz/utils/class.WpdiscuzCache.php on line 148

Warning: file_put_contents(): Only 0 of 419 bytes written, possibly out of free disk space in /home/cana7952/public_html/wordpress/wp-content/plugins/wpdiscuz/utils/class.WpdiscuzCache.php on line 148

Warning: file_put_contents(): Only 0 of 3901 bytes written, possibly out of free disk space in /home/cana7952/public_html/wordpress/wp-content/plugins/wpdiscuz/utils/class.WpdiscuzCache.php on line 148

I found this analysis of the Alberta electricity transition quite interesting by 2060 Project out of UVic (basically comparing their current plans of coal to gas switching versus also including nuclear) http://www.sciencedirect.com/science/article/pii/S2211467X17300032 . Their home page https://onlineacademiccommunity.uvic.ca/2060project/

This link boasts about the future of renewable energy in Alberta http://canwea.ca/wind-energy/alberta/

“Alberta now ranks third in Canada with an installed wind energy capacity of 1,479 MW. The province’s wind farms produce enough electricity each year to power 625,000 homes, equivalent to about four per cent of Alberta’s electricity demand.”

How accurate is this?

How accurate is this? Well it might be accurate at the very rare moments these wind turbines operate at 100% capacity factor. When reviewing this link, over the last 48 hours, as of this writing, their top output was 379MW https://cns-snc.ca/media/albertaelectricity/albertaelectricity.html

Hi Steve,
It looks like you’re using a data driven approach to discuss electricity generation in Canada. Nice work! My name is Alex, and I have started a social media campaign about energy in Canada that is 100% data driven. You might like our material.

Let me know your thoughts! alex@energyminute.ca