Like everyone else who ventures into the topic of how we humans, to live right, have to love, honour, and respect the material environment in which we live, I struggle with how to put things that are numinous and profound in a non-hokey, non-cornball way. Let me try again, because it is an important topic.

We not only live in the material world, we are of it. It is us. When we soil it, we soil ourselves. 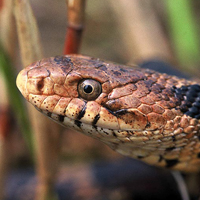 The Eastern Fox Snake. As an aspiring herpetologist in my younger days, I viewed this beautiful animal with near-reverence: like a cross between a unicorn and the Holy Grail. I caught (and released) numerous species of snake, including northern water snakes, garters, ribbon snakes, ringnecks, red-bellied, a massassauga rattler, a smooth green, milksnakes… but never a fox snake. They were rare even then. Today they are near extinction in Ontario. We humans are the cause. We are destroying their habitat.

This may sound like airy fairy New Age blather, but from what we know about evolutionary biology it is more than plausible. Watch Stephen Stearn’s excellent lectures on evolution and ecology (they are among my all-time favourite videos). At the end of the very first lecture, Stearns remarks that when you trace your parentage back through time—and I mean deep, deep time, many hundreds of millions of years ago—you reach a point where that single as-yet-unknown common ancestor of all life on this planet itself had no parent. Some combination of circumstances—temperature, water, substrate chemistry, and interplay among them—caused life to spring from non-living matter. Ponder this. It is profound. That confluence of rock, water, and heat is, literally, our ancestor.

People have a variety of responses when it comes to incorporating the implications of this kind of elemental profundity into their lives. My sneering reference to New Age (alleged) hokum is an example of a common one. (Like I sad, it is a struggle.) Abraham Maslow called this the Jonah Complex, a neurosis through which we, for numerous reasons, do everything but accept, and allow our actions to express, our own unique greatness. Greatness carries responsibility and for a variety of reasons that is intimidating.

These are not spurious reasons. One of them, suggested Maslow, is fear of hubris: we worry that success will go to our head, and that the higher we fly the harder we’ll fall. Where this becomes neurotic is where fear of the fall outweighs yearning for the fruits of greatness. So we avoid greatness. The neurosis is our response to being intimidated by our own potential.

Maslow’s suggestions for overcoming our fear of our own greatness and developing our potential were a bit thin, but still valuable. He suggested aiming for graceful acceptance of it: cheerful incorporation of the sobering realization into daily life. Graceful acceptance of our greatness can be achieved by cultivating a sense of humility and appreciation in our approach to areas outside our domain. These are inexhaustible. We can never run out of opportunities for appreciation of our true position in the universe.

Awareness of our own greatness brings us instantly into collision with the discomfort with the responsibility inherent in it. We humans are the only species that deliberately alters the thermodynamics of its physical environment. As I have noted before, we exist within a very narrow band of temperatures—18°C at the low end to about 23° at the high end. The range of surface temperatures of the planet we inhabit is much wider than that: about seventy Celsius degrees, from roughly -30°C to 40°C. This means that just about everywhere on the planet outside of about 10 degrees north or south of the equator, our natural body covering is inadequate to insulate us from the elements. So we fashion our own micro-environments, which range from the simple (clothing) to the complex (indoor heat and moisture control).

The latter of these, indoor heat and moisture control, has brought us into the collision with the discomfort of responsibility. We humans, for most of our existence, got our heat by burning wood and dung, which are the most easily available combustible material. But very recently in our evolution we discovered materials that release heat much more efficiently than wood and dung. These new materials are, in the order in which they were brought into mass usage:

With the use of these materials, we can easily thrive at latitudes that formerly held humanity in check. Even at high latitudes—like Ottawa, Canada, where I live, where we often get four-month-long winters with prolonged stretches of sub-zero temperatures—we humans have become, very recently, physically larger and far more populous. This is because we can now very easily live most of our lives inside that narrow temperature band I mentioned above.

Harnessing this energy was a remarkable feat of science and engineering. Because of it, we are now so successful as a species that we are literally crowding many other species out of existence. Much of this has to do with habitat destruction.

And much habitat destruction is occurring because of the enormous expansion in energy infrastructure. Our high-latitude lives are possible because of artificial bulk energy. We transport this energy through thousands of kilometers of pipelines, roads, railroads, and electricity transmission lines. All of these require corridors through physical territory, and creating and maintaining these corridors destroys habitat. At a time when we should be reducing this footprint, we are drastically expanding it.

One of the worst vectors of infrastructure expansion is wind energy. We have fallen victim to the fashion of believing wind is clean and green, and so are rushing to get as much of it into electricity systems as possible. Because wind is so inefficient—it typically delivers in Ontario only around 30 percent of the energy it is rated to produce—it must be overbuilt. Wind turbines are enormous, so to get appreciable amounts of energy thousands of them have to be built. Moreover, they must be geographically spread out so that we can be reasonably sure of getting wind energy from somewhere most of the time. This requires much more transmission than central station systems; hence it requires more corridors through new territory.

This greatly adds to habitat destruction. It is utterly unnecessary: as I have pointed out, Ontario could easily get more zero carbon electricity by simply adding capacity at any of the three nuclear plants in the province. Such capacity addition would have no impact on either the physical footprint of the plants themselves or on the transmission corridors that deliver their power into load centres.

The problems related to hydropower are similar to those of wind. A prominent gas industry funded NGO, the Ontario Clean Air Alliance, has recently seized on the idea of replacing the output of Ontario nuclear plants with hydropower from Quebec. (The OCAA’s aim—it is a gas lobby group after all—is to get Quebec to stop heating with electricity and heat with gas, a carbon heavy fossil fuel, instead. It supports the expansion of gas pipelines in Ontario, and if its Quebec fantasy were fulfilled, there would be more gas infrastructure in that province.) This would entail damming and submerging vast tracts of Boreal forest—the La Grande project of the 1970s, the first true mega-project in Quebec’s electrical history, created a man-made lake the size of Belgium, and a new project of similar capacity would have a similar impact. This would mean more habitat destroyed.

Wind, hydropower, and gas, require for their expansion enormous amounts of physical territory. If we continue to expand them, we will destroy more habitat and thereby accelerate the mass extinction of species that is currently under way.1

This is easy to see if we are objective, and if we respect facts and data and arithmetic. From this, it is also easy to see how it collides with the responsibility of greatness. But we show little aptitude for Maslow’s graceful, adult acceptance of this responsibility. We decry urban sprawl, and in the next breath applaud the expansion of energy infrastructure—like wind and solar farms and gas pipelines and vast new hydro reservoirs—that increases urban sprawl. Such scatterbrained irresponsibility is tolerable, expected even, in adolescents. In adult representatives of the human species, it is pathological.

What a piece of work is a man, how noble in reason, how
infinite in faculties, in form and moving how express and
admirable, in action how like an angel, in apprehension how like
a god! the beauty of the world, the paragon of animals—

And yet to me… what is the point of our greatness when we neurotically evade the responsibility that goes with it. We become chasers of popularity and celebrity, and we soil our own bed.

Thanks for this. This is very important. Seems to me we have two major challenges. One is rapidly collapsing bio-diversity. This is probably the most pressing. Climate change related to GHG’s is likely the other big one, but to this point it has been only a minor contributor to the extinction crisis.
Making an inadequate attempt to solve the latter problem by expanding the biggest driver of the former (our development footprint) is truly a fools game. I’m amazed at the supposedly concerned and thoughtful folk who are leaping onto the happy “renewables only will save us” bandwagon.
Between the massive impacts of biomass harvesting, damming of major watersheds, and wind and solar, the results are going to be truly tragic. Particularly so when nuclear, by any honest assessment, offers so much more net benefit.
Bottom line I think is that this is being seen by many in positions of influence as a development opportunity beyond all others. But in the end it will likely be a highly resource consumptive tragedy of the commons.

Also note how our planet has given us some built in safety like a magnetic field to deflect the solar radiation and how about our atmosphere containing oxygen that burns objects up before smashing into us.

Rick, interesting. I guess we owe the presence of enough free oxygen to burn incoming space objects (thereby preventing lethal collisions at the surface) to the activity of photosynthetic bacteria over billions of years. Which is ironic — we cannot live without free oxygen, yet the organisms that have produced so much of it as to make our lives possible are toxic above certain levels.

Imagine somebody coming along and proclaiming that there is no safe level of cyanobacteria — it’s all toxic. This is not so outlandish. There ARE people who think this.

Yes. It’s as if the “great” beings we think we are have no connection to evolution. We need to remember that we evolved and survived by adapting to the conditions the planet offered. It’s very arrogant to say we are separate and aliens on our own planet. We should seek to be aware how we do harmonize, how we have built in tolerance for more than we give our selves credit for. Yet we are vulnerable to the extreme temperatures we have triggered by forgetting what our ancestors knew better. That is to respect the earth and treat it as if we are of the earth because we are.

For every solar farm, there is another farm’s worth of forrest destroyed, or another farm’s worth of food imported long distances by carbon spewing trucks or container ships. I’ve done some back of the envelope calculations here (And I hope my math is fine), and I would rather not shovel 318 square kilometers of solar panels during our 4 month long winter to replace Bruce.