For the first 199,900 of the 200,000 years humans have existed in their present form on this planet, life for most of the population was simple. Most people spent the hours from sunup to sundown getting food and making sure that they and their families would spend the hours from sundown to sunup sleeping in a warm and dry place. Those who were not 100 percent successful at both those activities knew nothing but those activities. Those who were successful, if they were not overburdened with the “archaic vestiges” of the traumatic times when they were unable to obtain adequate food or adequate shelter, got a glimpse, perhaps during those moments when the pressure to ensure adequate food and shelter for a reasonable time into the future had subsided enough to allow some measure of reflection and enjoyment, of an amazing life beyond survival: one in which human capacity for love and play and happy ascension to the scrutiny of the world’s secrets moved toward something like its potential. To live in that world was, for most people, for most hours of most days, until the 20th Century, a dream that was simply beyond reach.

The electric grid, in those lucky countries in which it spread everywhere, suddenly made that impossible dream an easily attainable reality. This enabled many people to make instant use of electromagnetism by assigning to electric powered machines the hard labour that people themselves had for the first 199,900 years of human existence done with their own hands, or with animals, or with the hands of slaves.

Freed from the heartwrenching drudgery of scraping for bare survival on the surface of a tough planet, an unprecedented number of people immediately began exploring that life-beyond-survival. Today’s connected world of intercontinental air travel, smartphone apps, and instant accurate information on pretty much anything under the sun is the direct outcome of this en masse exploration.

But having this breathtaking opportunity at our fingertips does not mean that we humans are free from those “archaic vestiges” of primal panic and fear. Watch the stock market some day. Traders gripped with panic, or emboldened by equally irrational exuberance. Is any of them in any real danger of starving or dying of exposure to the elements? Has any of them just narrowly escaped such a fate? Of course not. But humans as a species are only about five or six generations out of literally hundreds of thousands of years of evolution in a dark and dangerous and brutal and merciless world where you reacted immediately to what your senses told you was happening, or you died. Hence the stock market trader’s heart rate, breathing rate, and adrenaline level on the next uptick or downtick.

And just because the potential quality of life is for most people unimaginably better today than it was even one hundred years ago does not mean the world has become physically safe, or thermally comfortable. It’s still the same planet, with the same hot liquid core, ever-shifting continental plates, gravitational acceleration, and surface temperatures ranging from minus-40 to plus-40. We still depend on artificial bulk energy to help us cope with these physical realities.

The recent history of carbon dioxide (CO2) concentration in the atmosphere bears witness to humankind’s success in dealing with these physical realities. As you can see from the chart, that concentration was roughly 275 parts per million (i.e., 0.0275 percent) of the atmosphere in 1750—which was when steam engines, using coal as their fuel, began powering the Industrial Revolution. By 1900, after the first electrical power was wheeled out of Niagara Falls via alternating current and long transmission lines, steam engines around the world had bumped the global CO2 concentration to just under 300 ppm. 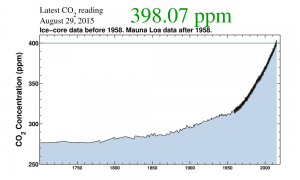 And during the 20th Century—the century in which humankind emerged from hundreds of thousands of years of darkness and living by our wits in life-and-death circumstances into light and sudden abundance and relative security, and opportunity for exploring life beyond desperate survival—that concentration skyrocketed to the roughly 400 ppm we see today.

The 400 ppm also represents a debt we humans owe. It is essentially the product of what we borrowed from the planet to lift ourselves out of darkness and cold and desperation. We have not even begun to pay off this debt, and it is growing. But the planet is beginning to collect. Hurricane Sandy, and the other unprecedented storms we have experienced recently, are just a small indicator of how far behind in our payments we are.

The 400 ppm really are just the tip of a gigantic iceberg in terms of the sheer size of our debt. En route to jacking the CO2 concentration to 400 ppm, we have produced a mass species extinction that rivals the end-Permian extinction 250 million years aro and the end-Cretaceous 65 million years ago, the one that wiped out not only the dinosaurs but all land animals bigger than five kilograms.

Paradoxically, we know this because of the enormous burgeoning of science that co-occurred with the Industrial Revolution and accelerated sharply with the advent of the electricity grid. We also discovered, barely decades after the grid became widespread, how to power the grid with an energy source that creates zero CO2 and requires a tiny fraction of the materials and infrastructure of the CO2-producing fuels that power most of it today. That energy source is uranium, an element available in mineral form all across this planet.

In 1939, humans discovered uranium as an energy source. Within 15 years of that discovery, we had invented machines that use it as fuel. And within 20 years of that invention, some of us were using it as the main fuel for our electricity grid. My home province of Ontario, a highly advanced industrial jurisdiction which if it were its own country would rank in the top five in the world in terms of prosperity and quality of life, today makes most of its electricity with uranium. See Tables A1 and A2 in the upper right; all the energy (in megawatt-hours, or MWh) in the Nuclear category comes from uranium.

So it’s not like we humans have no choice but to keep adding CO2 to our atmosphere and oceans, and ravaging the planet by drilling into sensitive ecosystems or submerging vast tracts of land forests or building huge pipelines, all to keep us out of darkness and cold and desperation. We can stay out of darkness and cold and desperation quite easily without doing any of those things.

We know exactly how to do this. We need to start doing it now. Countries that worry about their CO2 emissions have, in places like Ontario, and France, and those corners of the U.S. that were early adopters of nuclear energy, examples of exactly how to proceed with social and economic development that has a minimal impact on our planet.

Let’s start repaying our debt to the planet now. Let’s not keep waiting for the planet to come to collect the rent. As we have seen, she arrives at our doorstep in a foul temper.

Hidin’ from the rent man
Oh it make me want to cry,
Sheriff knockin’ on my door,
Ain’t it funny how the time fly.
—Angus Young, Malcolm Young, Bon Scott

Warning: file_put_contents(): Only 0 of 11776 bytes written, possibly out of free disk space in /home/cana7952/public_html/wordpress/wp-content/plugins/wpdiscuz/utils/class.WpdiscuzCache.php on line 148

Warning: file_put_contents(): Only 0 of 302 bytes written, possibly out of free disk space in /home/cana7952/public_html/wordpress/wp-content/plugins/wpdiscuz/utils/class.WpdiscuzCache.php on line 148

Warning: file_put_contents(): Only 0 of 11802 bytes written, possibly out of free disk space in /home/cana7952/public_html/wordpress/wp-content/plugins/wpdiscuz/utils/class.WpdiscuzCache.php on line 148

Great article Steve. Can you work the Tragically Hip into your next piece.

I swear to god, I had no idea AC/DC was playing Ottawa yesterday — that was pure coincidence.

I will try to work the Hip into something.

good point. There definitely is a lot of inaccurate information, and it’s the deliberately inaccurate stuff that really makes my blood boil. The mainstream green groups are the worst purveyors of information in that category.

A great pro-nuclear environmentalist categorizes mainstream greens as misanthropes, grifters, and ignoramuses. I can forgive the latter, but not the former two .

The term you’re looking for is “disinformation”.

Thanks E-P. “Disinformation” because it’s not just wrong, it’s intentionally wrong, for propaganda and deception.

I really like these tables Stephen, especially Table A3. Does anyone know of similar tables for the United States, or its’ specific states?

Kevin — I’m not sure about similar tables for US states. I suspect they or the underlying data to make them possible do exist somewhere, but have not seen any yet.