We humans are the self-appointed landlords of planet Earth. We do not actually own this planet, but we behave as if we do. Unfortunately, we have abdicated many of the responsibilities that landlords typically have regarding providing a safe, clean, and stable environment for our tenants. Our tenants in this analogy are the millions of other species of organisms that share the planet with us. Far from providing these organisms a safe, clean, and stable environment, we have summarily evicted many of them, and are suffocating and poisoning those that remain. 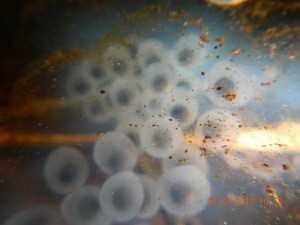 These appear to be the eggs of some kind of amphibian, perhaps a salamander or toad. They were in a stream in glaciated Muskoka terrain in central Ontario in early May. Amphibians are becoming scarcer in Ontario. Is this part of the current general worldwide mass extinction? Apparently, yes. And apparently, because we humans have physically destroyed much of the habitat in which innumerable creatures make their homes, and dumped so much toxic pollution into the air and water, we are the cause of this mass extinction.

In short, we are abusing our fellow organisms.

Much of this destruction and suffocation/poisoning occurs because of the way we make our way on planet Earth. As I mentioned in the previous article, we humans find it so difficult to cope with gravity and the specific heat of water that we have devised an ingenious way of circumventing the taxes that these realities impose on us. That ingenious way is the heat engine, which utilizes a chemical or nuclear reaction to do much of the heavy work that is necessary in order to survive on this planet.

As I pointed out in the last article, almost every one of the millions of heat engines in operation in the world right this minute utilize chemical reactions. That is to say, they make use of combustion, which combines carbon fuel with oxygen from the air to release heat. And as I also pointed out, combustion produces carbon dioxide (CO2). We humans use so many combustion-based heat engines that the CO2 they have produced is actually causing our planet’s very climate to change.

This is only one of the ways in which we humans have abdicated our responsibility as self-appointed landlord of the planet.

But what I did not mention is the difference in the sheer amounts of fuel that combustion heat engines require compared with nuclear. Combustion heat engines require vastly more fuel than nuclear. This is because the average chemical combustion reaction releases energy on the scale of roughly 10 electronvolts (eV), whereas a nuclear fission reaction releases energy on the scale of 108 eV. That is a difference of 7 orders of magnitude, or ten million-fold.

This has enormous implications for humankind’s stewardship of the planet. A large part of the reason we are evicting, suffocating, and poisoning our fellow creatures and organisms on this planet is because most of the heat engines we use to make our lives easier run on combustible fuels like oil, natural gas, and coal. Oil, natural gas, and coal are literally millions of times less efficient than nuclear fuel. That means we must dig, suck, and pipe literally millions of times more oil, gas, and coal than uranium (the main nuclear fuel).

This means millions of times as much physical infrastructure: oil rigs, pipelines, refineries, coal mines. The physical infrastructure required to find, produce, and market these incredibly inefficient fuels has criss-crossed the globe. It cuts through the homes of countless of our fellow creatures. It has contributed to the current mass species extinction, from which scientists estimate it will take the natural system millions of years to recover.

Those creatures whose homes we have not destroyed are being suffocated and poisoned, again from our use of chemical combustion fuels like oil and gas and coal, but this time from the gargantuan amounts of new unnatural chemicals we create when we burn chemical fuels. i.e., the inefficiency of these fuels comes out also in the sheer amount of waste they produce. Kilowatt-hour for kilowatt-hour, natural gas, the cleanest combustion fuel, creates literally tens of thousands of times as much waste as nuclear fuel (see article).

Much of this waste is in the form of gas, which is extraordinarily difficult to capture and keep separate from the environment. This means that the literally billions of tons of annual waste from the combustion of chemical fuel has no restrictions on its global reach. The toad or salamander that laid the eggs in the photo off the top may be safe for the time being from having her home physically destroyed; the stream in which she laid her eggs cuts through rugged remote terrain in Muskoka Ontario. But she is not safe from the effects of gaseous pollution from heat engines. The air above the small patch of the stream that runs through her home is part of the global atmosphere. There is nothing, other than variations in fluid dynamics, keeping air pollution away from her eggs.

We humans simply cannot continue evicting, suffocating, and poisoning our fellow creatures. We know today, and have known since the 1950s, how to make heat engines that do not run on such dirty, inefficient, and destructive fuels. What does it say about us that so many of us have elected to not use nuclear fuel, which is literally millions of times less destructive?

← Anything but what works: why atmospheric carbon is as high as it is, and what we must do about it
Hiding from the rent man: what 400 parts per million tells us humans about ourselves →
0 0 votes
Article Rating
Subscribe
Login
2 Comments
Oldest
Newest Most Voted
Inline Feedbacks
View all comments

Warning: file_put_contents(): Only 0 of 3813 bytes written, possibly out of free disk space in /home/cana7952/public_html/wordpress/wp-content/plugins/wpdiscuz/utils/class.WpdiscuzCache.php on line 148

Warning: file_put_contents(): Only 0 of 304 bytes written, possibly out of free disk space in /home/cana7952/public_html/wordpress/wp-content/plugins/wpdiscuz/utils/class.WpdiscuzCache.php on line 148

Warning: file_put_contents(): Only 0 of 451 bytes written, possibly out of free disk space in /home/cana7952/public_html/wordpress/wp-content/plugins/wpdiscuz/utils/class.WpdiscuzCache.php on line 148

Warning: file_put_contents(): Only 0 of 979 bytes written, possibly out of free disk space in /home/cana7952/public_html/wordpress/wp-content/plugins/wpdiscuz/utils/class.WpdiscuzCache.php on line 148

Just an editing comment.
To fix the huge blank space next to the egg pic, there should be an option within your editor program for “Word Wrapping”. Amongst the options for font style, size, line spacing, etc… Turning work wrapping on will allow the main body of your articles to surround any pictures or graphs you insert. Perhaps right clicking on the pic will allow access to that option also.

Another excellent article. One possible reason for decreasing eggs in the streams might be linked to water acidification. A recent study showed that pink salmon were being affected by slight decreases in freshwater PH levels – similar to how pteropods are reacting to ocean acidification. http://phys.org/news/2015-06-freshwater-ocean-acidification-stunts-growth.html

We also convert food to undesirable chemicals after we eat and digest it. Then add it to local water ways with no treatment. We are 40 years behind US in this regard. Last year we finally passed a law requiring cities to comply with a two stage sewage treatment system but they have a 2040 deadline.