Presidential election campaign coverage often talks about the “bubble” that encloses candidates and their campaign teams. The bubble is essentially an echo chamber where you hear only those voice around you, and those voices agree with yours. This agreement has more to do with the psycho-dynamics of groupthink than objective reality, which leads to serious disconnects between what is agreed on and reality. Media reporters, especially those who are not embedded in the campaign, love to point up these disconnects—as if they themselves are immune from bubble-itis. They aren’t. 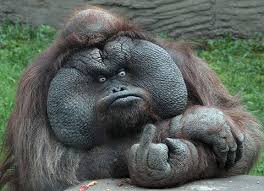 The ugly that covers this ape is as intimately knowledgeable about the ape inside as—you might think—the mainstream media is about that lamentably under-delivering nuclear “event” at Fukushima. After all, the world media covered Fukushima as completely as ugly covers the ape. But judging by a truly whopping falsehood printed in the Globe and Mail last week, that particular media vehicle’s knowledge of Fukushima either isn’t as intimate as you would expect, or they care less about accurately reporting that knowledge than you think.

A week ago, the Globe and Mail, which aspires to be Canada’s national newspaper of choice for serious readers, published an editorial arguing that Canada’s federal government should not impede the development of a uranium mine in Newfoundland-Labrador just because the mine is owned by an Australian company. The original editorial as it was published on Thursday June 25 contained this curious claim:

In March, 2011, the meltdown of the Fukushima nuclear power plant in Japan killed almost 16,000 people… .

Actually, that claim is more than curious. It is utterly false. As I and others predicted from Day One of the Fukushima meltdowns (and let’s remember that Day One was March 11 2011, 4,290 days ago), nobody has died or even gone to the hospital from the physical effects of ionizing radiation. The meltdowns have been quite literally a casualty-free episode.

The Globe subsequently corrected that spectacular falsehood, with neither apology nor regret. My question is how and why the falsehood made it into the editorial in the first place. I mean, sixteen thousand people. That’s the population of an Ontario community the size of Bracebridge, or Napanee, or Petawawa, or Midland, or Port Hope. The fact of zero casualties out of Fukushima has been well known in nuclear circles (and only too well known in anti-nuclear circles) ever since the meltdowns occurred. You might imagine that it would be known also in newsrooms—they have only covered Fukushima, like ugly covers an ape, since Day One.

Were they trying to justify the who-knows-how-many column inches and binary digits (bits) they have devoted to this singularly under-delivering non-event, by simply inventing a casualty figure that would warrant all the handwringing hyperbole?

Big Fossil, and its many supporters in the “green” movement who pretend to oppose it, worry about nuclear energy not because nuclear poses some special danger to humans—it obviously does not—but because nuclear can eat Big Fossil for breakfast when it comes to providing the energy and power that societies need, with zero air pollution and a minuscule fraction of the physical footprint of fossil fuels.

Or did they just honestly slide over from reality into the comic-book world of hysteria and science fiction that they themselves have helped to create, and come to believe that a population equivalent in number to that of Port Hope Ontario really had perished because of radioactive fallout from Fukushima?

But I should be fair to the Globe. Like all media organizations, they are in a desperate race for eyeballs. To get those eyeballs, they will say pretty much anything.

Including “the meltdown of the Fukushima nuclear power plant in Japan killed almost 16,000 people.”

The problem is, every time they print or hint at such a falsehood, they put money into the pockets of the fossil fuel companies that are the biggest worriers about nuclear energy. Big Fossil worries about nuclear energy not because nuclear poses some special danger to humans—it obviously does not—but because nuclear can eat Big Fossil for breakfast when it comes to providing the energy and power that societies need, with zero air pollution and a minuscule fraction of the physical footprint of fossil fuels. So when Big Media helps to perpetuate silly comic-book pseudo-science alleging grave dangers associated with nuclear energy, Big Fossil gets richer.

And the richer Big Fossil gets (forgive my conspiracy-theorizing), the more money it has to advertise in Big Media.

And the falsehoods don’t just put money into undeserving pockets. They put more carbon into the air, because they ensure that more of the kilowatt-hours of the energy we humans use to negotiate our way through life on the surface of Planet Earth will come from the burning of fossil fuels.

← Waste disposal in Ontario: kilograms, litres, and oil barrels
Fighting carbon with windmills is like fighting the Blackhawks with mosquitoes: why ignoring Al Gore is good for both the planet and Toronto’s olfactory self-image →
0 0 votes
Article Rating
Subscribe
Login
8 Comments
Oldest
Newest Most Voted
Inline Feedbacks
View all comments

Warning: file_put_contents(): Only 0 of 14581 bytes written, possibly out of free disk space in /home/cana7952/public_html/wordpress/wp-content/plugins/wpdiscuz/utils/class.WpdiscuzCache.php on line 148

Warning: file_put_contents(): Only 0 of 5878 bytes written, possibly out of free disk space in /home/cana7952/public_html/wordpress/wp-content/plugins/wpdiscuz/utils/class.WpdiscuzCache.php on line 148

Warning: file_put_contents(): Only 0 of 306 bytes written, possibly out of free disk space in /home/cana7952/public_html/wordpress/wp-content/plugins/wpdiscuz/utils/class.WpdiscuzCache.php on line 148

Warning: file_put_contents(): Only 0 of 336 bytes written, possibly out of free disk space in /home/cana7952/public_html/wordpress/wp-content/plugins/wpdiscuz/utils/class.WpdiscuzCache.php on line 148

Warning: file_put_contents(): Only 0 of 12438 bytes written, possibly out of free disk space in /home/cana7952/public_html/wordpress/wp-content/plugins/wpdiscuz/utils/class.WpdiscuzCache.php on line 148

The Globe and Mail editorial should have a senior staff member proof reading and handling these kinds of “editorials” if it deserves to be called that. It is unforgivable that a senior staff person or any person for that matter could be so poorly informed on such an important issue. The media’s handling of the Fukushima meltdowns will eventually be considered on par with other stupidities of the new century such as the re-election of Bush. Could it be that the media relies on getting it’s information from other media? Even that would not explain how zero deaths could become 16,000.

Well, there’s the toll of the quake and tsunami which comes to about that number, and gross professional negligence on the part of the editorial staff could result in it being attributed to the meltdowns.

Note, gross professional negligence, which calls for a very public “mea culpa” and remedial measures if not termination of employment.

From the get-go the tsunami deaths were conflated with Fukushima, which gives some hint as to the depth of the intellectual and moral bankruptcy of the antinuclear movement. It’s bad enough that a mainstream news organization has for the sake of a few more eyeballs abandoned critical vetting of irresponsible antinuke tripe. But for it to blithely legitimize the tripe through an “error”… well, that gives a hint as to another depth. You call it negligence and maybe that’s right — maybe it’s just the biz.

There really is a bubble inhabited by the press. And they don’t know it.

Gary Mason (ex-sports-columnist in the Vancouver Sun, turned British Columbia editorialist in the Globe), in an article about oil prices on the Canadian economy, termed Jock Finlayson as one of Canada’s leading economists. I’m pretty sure he is a more than adequate economist, but is he academically prominent? (He doesn’t have a PhD for instance.)
http://www.theglobeandmail.com/news/politics/impact-of-plunging-crude-prices-varies-across-western-provinces/article22325249/

I don’t disagree with the intellectual coherence of Finlayson’s viewpoint (that lower crude prices will result in lower Canadian growth) as quoted in the article. Not that one can’t argue against it, but it has defensible points.

But Finlayson is regularly quoted by the Vancouver Sun, and the Globe and Mail. He even contributes articles to those publications. And he is quoted on all sorts of issues (not just energy). And this is because Jock is employed by an organisation, the Business Council of B.C., seeking to influence legislation and public opinion. Such people surely, as part of their job, know how to massage their viewpoints into the Press.

It is sad that in Gary’s mind that because he talks to Gary, Jock is therefore “prominent”. Gary, despite being a reporter for years, really is this naive.

Here’s another Gary Mason special, this time on minimum wage, featuring “one of the top economists in the country”. Can you guess who it is?
http://www.theglobeandmail.com/news/british-columbia/living-wage-wont-fix-vancouvers-income-inequality-but-its-a-start/article25212874/

Remarkably, even WITH the deaths due to the 2011 Tohoku earthquake and tsunami, Japan’s overall 2014 death count comes to less than what one would expect by extrapolating past trends…..

Re: “Including “the meltdown of the Fukushima nuclear power plant in Japan killed almost 16,000 people.”

Does anyone recall the infamous super-bold newspaper heading (The NY Daily News or NY Post or such) during Chernobyl: “50,000 DEAD!!” ?

God save accuracy in media! Can they be sued for outright lying (deception)?

When you willfully and maliciously mislead the public and affect lives and jobs so to serve your own ideological views and biases and hang-ups, to hell with being fair. I’d really to know whether the Globe’s media peers or Canadian industry is royally on their case for coy FUD like this!