Readers of this blog probably think I am totally against solar power. I know, in my April 30 post about Ottawa’s Solar Soirée, I lampooned the pseudo-green thinking that produced Ontario’s Green Energy Act. Essentially, those who think solar energy can replace conventional grid electricity sources need to brush up on basic physics and learn to listen to the data from their own daily life experience.

Beautiful, and looks high tech, but it is actually woefully inefficient compared with conventional power generation like coal-, hydro-, or nuclear-powered generation. However, there are places where solar makes eminent sense. One of them is remote areas where only small amounts of power are needed to keep vital electronic equipment running.

Solar photons, which are the particles or packets of light from the sun that generate electric current in solar panels, do not arrive at our planet’s surface in numbers sufficient to generate any more than a very small current in a panel of practical size. This fact is illustrated by my need, as a resident of Ottawa Canada, which is roughly 45 degrees north of the equator, to wear a warm coat in winter time—the solar photons that strike every square centimeter of the planet’s surface are simply not numerous enough to keep me warm in shirt sleeves. And if they cannot keep me warm in wintertime, how can anyone expect them to create the billions of kilowatt-hours of electricity—a much higher form of energy—to keep me and 13 million of my fellow Ontarians warm? Proponents of a solar grid cannot give a credible or coherent answer to this question.

However, much as I enjoy debunking hare-brained notions about solar panels replacing nuclear plants, I am not against solar energy. In certain specialized applications, solar power can be extremely useful. I have recently been charging my cell phone using a very creative solar charging module designed and built by my friend and colleague Darcy Whyte. The photos below show various aspects of this module. 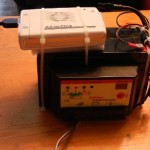 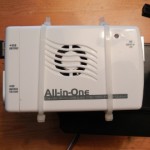 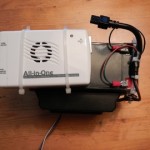 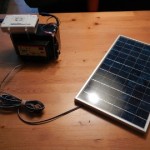 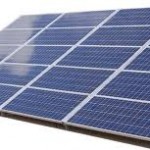 Beautiful, and looks high tech, but it is actually woefully inefficient compared to conventional power generation like coal-, hydro-, or nuclear-powered generation. However, there are places where solar makes eminent sense. One of them is remote areas where only small amounts of power are needed to keep vital electronic equipment running.

The Grid-B-Gone, as Darcy has (tongue in cheek) named it, consists of four major components:

The Grid-B-Gone is designed of course only for small electronic devices requiring just a small amount of power. So think of cell phones, digital cameras, MP3 players, and possibly a small notebook computer.

For me, I will leave it at the family cottage in Muskoka. Though the grid availability factor in our neck of the woods is over 99 percent, one tends to remember the one percent of the time the power is out. During those times, it would be handy to have a functioning cell phone and computer. Assuming of course that the grid is down only due to a temporary local outage. In a general prolonged outage, which Ontario, Quebec, and several northeastern U.S. states experienced in the famous Ice Storm of 1998, cell phones might be useless.

The Grid-B-Gone’s modular design does away with a lot of the problems that prevent greater uptake of micro-power solutions. It is designed to be plug and play: you put your panel into position, and just plug in whatever devices need charging.

The four components of the Grid-B-Gone cost roughly $100. I have measured the amount of electricity my cell phone uses for charging: it charges with about 0.01 kilowatt-hours. Ottawa utility-delivered electricity costs, depending on the time of day, 6.7 cents, 10.4 cents, or 12.4 cents per kilowatt-hour. So even if I charged once daily at the very highest rate, grid-charging my cell phone would cost me $3.65 per year. It would take me 27 years of daily charging at the peak rate with the Grid-B-Gone to pay off its $100 cost.

Clearly, you would not buy the Grid-B-Gone to save on electricity costs. You would get it to use in places where the grid is not available.

So I highly recommend the Grid-B-Gone for use in places where the grid really is gone. In those applications, it is an innovative solution for low-power devices.

← What runs Toronto? An instructive snapshot from the last few days
The G-8 summit climate: “nothing is being done” →
0 0 votes
Article Rating
Subscribe
Login
0 Comments
Inline Feedbacks
View all comments