In 1961, a year after my birth, the world’s first nuclear powered automatic weather station was installed on Axel Heiberg Island in the Canadian high arctic. Unlike nuclear fission, which is right now providing the electrical output shown in Tables 1 and 2 in the left hand sidebar, the nuclear power for the weather station came from the heat generated by disintegrating radioactive material. That material was strontium-90, a fission product which is made in nuclear reactors. 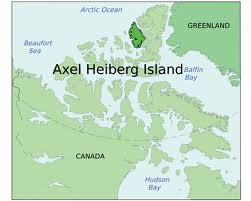 The location of the world’s first radioisotope-powered weather station. A return flight for one passenger to Axel Heiberg from Resolute (on the southern part of Cornwallis Island) costs roughly $2,100. That is why the station was powered with radioisotope decay heat: the station had to run with 100 percent reliability. Decay is an inherent physical property of radioisotopes: it happens no matter what.

Sr-90 has a half life of roughly 29 years. It decays by ejecting a Beta-minus particle, essentially an electron that is produced when a neutron morphs into a proton. That Beta leaves the nucleus at a relatively high energy: 200,000 electron volts. That is why a mass of Sr-90 will generate heat: when those Beta particles slam into the first material they encounter, the friction of that collision creates heat. It is exactly the same principle in the case of electrical resistance heating. Your cookstove coil turns red-hot because of the innumerable electron collisions that occur in the coil material, which resists, rather than conducts, electric current. (The analogy ends there, as your stove uses the electromagnetic force to generate heat, while a radioisotope device loaded with Sr-90 uses the weak nuclear force.)

The heat from disintegrating Sr-90 is harnessed using a radioisotope thermoelectric generator (RTG). An RTG incorporates a series of thermocouples, which use heat differences to generate an electric current.

Thermocouple-based RTGs have no moving parts and are therefore extremely reliable. Essentially you design them based on the electric current required by your application, taking account of the length of time the application will require that current. Then you load them with enough fresh radioactive material to deliver the thermal power required to produce the electric current for the duration of time needed. The decay heat will generate current at that level until the material has decayed to the point where there is not enough heat to maintain that current.

The RTG that powered the Axel Heiberg weather station was loaded with less than half a kilogram of Sr-90 in the form of strontium titanate (SrTiO3), a non-soluble compound. It generated 5 watts at 4 volts—1.25 amps—without fail, for two years.

As I said in “Inuvik running out of gas,” there are numerous applications in which Canada could make use of the Sr-90 that it produces in nuclear power and research reactors.

So why haven’t we Canadians used this material? My guess is, because it is nuclear material, and we have been taught to fear it. Somehow, we have been bamboozled into believing that stuff like strontium-90 is irredeemably dangerous.

It is not. Strontium-90’s decay product, ytttrium-90, is used to fight various types of deadly cancers. As you can see in the fact sheet on strontium published by the Argonne National Laboratory, the biggest health threat that Sr-90 poses is ingestion: it must be taken into the body before it can do harm. The Sr-90 in the Axel Heiberg RTG was, as mentioned, in the form of strontium titanate, a solid, non-soluble compound. That means for it to enter your body, you would have to chip a piece of it off, and swallow it.

There are a lot of other materials that can also do grievous harm if you swallow them. Fiberglass insulation, for example. It would be fairly easy to eat: just go to a construction site, find a bale of rock-wool insulation, pull out a tuft, and eat it. It will rip up your insides, and you could die a horrible death.

I personally cannot think of a reason why anybody, other than Frank Rizzo, would do such a thing.

But I also cannot think of why anybody would go through the trouble to dismantle a heavy RTG and chip off a piece of strontium titanate and eat it. Especially when it would be much easier to eat some rock wool insulation, or drink some chlorine bleach.

Somehow the Sr-90 in the RTG has been portrayed as far more dangerous.

I think it is time we stopped indulging our silly paranoid fantasies. We should use the useful, carbon-free heat that Sr-90 safely provides.

← CANDU in Japan: different, proven, and symbiotic with the current fleet
Pickering license renewal: to dump, or not to dump, nine million tons of carbon into our air every single year, for five more years →

14 comments for “Isotopes for heat: an old new idea whose time came, went, and has come again”

Item A1 Current concentration of CO2 in the global atmosphere:
416.08 parts per million
In the last hour:
This content is updated at 50 minutes past the hour. Refresh at that time to see latest available data. Sources: www.ieso.ca and EmissionTrak™